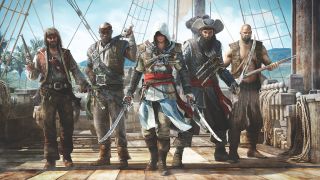 Back in September 2013 Assassin’s Creed was starting to look like a franchise whose limits had been explored and exhausted. Off the back of the messy AC3 and, er, three Assassin's Creed 2s it felt like a series running out of ideas.

Then, in October of that same year, Assassin's Creed was the hottest thing around thanks to Black Flag. It was a game that took only the most recognisable elements of the series and superimposed them on an open world pirate fantasy, complete with grandiose naval battles. It reinvigorated the series and was Ashraf Ismail's first credit as game director. Now he's done it all over again, reviving the series again with Assassin’s Creed Origins after a few lacklustre instalments.

As befitting a game about history we talked to Ismail about Black Flag and how he managed to take such an established series so successfully in a completely unexpected direction.

Black Flag is widely considered to be among the best Assassin’s Creed games. What is it that you think makes it so popular?

Ashraf Ismail: I think, first, we went after a fantasy that hasn’t been seen in video games in a long time, at least to the level of realisation that Assassin’s Creed is able to achieve. So there was a novelty to the fantasy of being a pirate, the naval combat, exploring the Caribbean. For sure there was something unique there I think.

It was also a game where, for almost two years, it was mostly focused on building content, building the world, building various gameplay elements. So there was a lot in the package at the end of the day, and we had time to polish it, to really hone that experience, and tweak and tune the naval combat until it felt wonderful. I think the naval combat itself was one of the stars of the show. There was the novelty [factor] but at the same time I think there was a depth of gameplay there that was very unique and new to AC.

There was also the first steps of an RPG element which was inside the naval combat that I think again was very new to the series back then, and I like to think people appreciated that and it gave them a lot of time to play the game.

Were you involved in the initial pitch for the game?

AI: Yes, absolutely. I joined the project in the very early days. I was, I guess you could say, the beginning of the design team, so yes I was part of the process of pitching the game.

What was the reaction when you suggested pirates as a theme?

AI: I think it was quite well-received very early on. AC3 was still in production at the time, and they had that naval section to the game, so the fact that we were trying to leverage a technology that was just being brought to the table, the fact that we were taking it to the next level was appreciated by the company. Very early on the pitch was accepted, and it opened the door for us to delve deep into that experience.

Sailing and naval combat were popular in AC3. You made it better in 4, and it appears again in Origins in a different form. Did you always plan to bring it back?

AI: Yes, this was something pretty early on that we wanted to bring back. We always felt that this was a really powerful aspect of history and the world that opened the door for us to try various settings, so it naturally made sense for us to bring it back. The transition from Black Flag to Unity was, well, I wouldn’t say it’s a brand new engine, but a lot of core elements [were redone]. So things like naval [gameplay] went away. We felt by bringing it back, even for Origins, it was actually opening the door to saying, ‘Can we create these exotic experiences in the game? Can we create something that feels really unique and novel to AC but at the same time giving us a drastically different experience to the ground game?’ So yes, from the beginning of the project there was an intention to bring back naval [gameplay]. Of course in our setting we knew that it was going to be more of a pace-breaker and an exotic element than at the core of the experience as it was in Black Flag.

The sailing mechanics that your team honed are now forming the basis of Skull & Bones. How do you feel about your work inspiring other games like this?

AI: We were super proud of what we achieved on Black Flag, and having that be something that’s taken forward to a multiplayer context is thrilling and exciting. They’re doing some really awesome stuff over there. It’s gratifying to know that there was such enjoyment from the community that allows Ubisoft to go further with it and put more effort behind it. It’s incredibly gratifying.

Is the Skull & Bones team coming to you for pointers?

AI: Well a lot of the people who worked on Black Flag at the Singapore studio are part of that team. Of course early on in the project there were a lot of conference calls and discussions about best practices and learning design concepts, for sure. Having said that, this is a multiplayer game in a very different world, and they’re pushing a lot of progression elements, so the game has its own... they need to really define a lot of their own design.

In the past you and your team have talked about The Legend Of Zelda: The Wind Waker and Red Dead Redemption being inspirations for Black Flag. Did you have similar specific inspirations for Origins?

AI: We’re always looking at what’s out there, at the competition. I love what the competition’s doing, they’re pushing envelopes so we need to learn from that. Having said that, the initial inspiration for Origins, which might sound a bit funny, but it was really reflecting off Black Flag. We spent a lot of time in the early days reflecting on how people were consuming Black Flag and analysing what we thought allowed the greatly increased amount of playtime.

One thing we noticed compared to other ACs is Black Flag had a really large amount of playtime. We reflected on that, asked ‘What happened? What was it? Was it really the naval aspect, was it something else?’ What came out of it was actually the RPG element. The naval [gameplay], at its core, was actually RPG-based and you had this challenge that’s really high and difficult, and you had this learning curve and this scheme of upgrading your ship.

So we took that idea and said, ‘OK, can we actually take AC there, where it’s not just a certain part of the game as RPG, but the whole game is that?’ So that was the initial reflection, we really took that from Black Flag. That was the induction to saying ‘Let’s make an action-RPG in terms of Assassin’s Creed’. Again, of course we look at what’s happening in the industry, in other games, but I would say the core of what we started was actually trying to understand what happened on Black Flag. It had an odd increase of playtime that we hadn’t seen in the series before, and so we really tried to reflect on that and say ‘Can we take that and explode it?’

Do you think with that initial goal, you did everything you wanted to do with Origins?

AI: Yes, I mean we legitimately took an open- world action-adventure game and mixed it into being an action-RPG. I feel quite confident in saying that, and I think so far this is the reception we’ve received, how it mixes really well together and feels good. And the initial results show the sheer amount of play time we have, it’s starting to pay off. What’s amazing is that it also opened the door for us to push the concept of gear and equipment. How do we treat this stuff? How can we give it value and meaning, in a game that’s grounded in history? So we don’t make a realistic game but we try to make a credible game. So that was a big challenge for us: how can we maintain that credibility, but have tons of weapons and attribute stats and ability points. And I’m actually quite proud of what we’ve achieved. It was a very difficult mandate that we set ourselves, but I think we achieved something with it.

There must have been a sense of deja vu when I’m guessing you got a call from Microsoft saying they had another new console in the works. How did that affect development of Origins?

AI: You’re right, it was a bit of deja vu! Actually the transition was the smoothest I think we’ve ever had. We literally had the build running on the first kit we received within two days. Microsoft contacted us, we knew what the hardware was going to be, we kind of had a first version of the specs. And having gone through this before, we had practice. So we have programmers, artists and technical artists who are dedicated to each platform, making sure that we can push it as much as possible for the Xbox One or Xbox One X. We received the hardware, we tried to put the game on it, and again it was almost seamless. It just started working very quickly. There was literally no hitch or bump, it just moved forward. And then it was a matter of saying ‘How can we push the visuals, the content, making sure it shines, so that it takes advantage of the hardware?’

What’s next for you in regards to Assassin’s Creed? Do you already have a plan for your next game?

AI: No, right now we’re still supporting Assassin’s Creed Origins. We see that there’s still value in more content, so there’s two DLCs for sure, but also freely available content that we’re trying to push. So we’re still working on that. A lot of us still need to take a vacation [laughs], including myself. So I think probably after we ship the DLCs, that’s probably when we’re gonna start really considering what do we do next.

This article originally appeared in Xbox: The Official Magazine. For more great Xbox coverage, you can subscribe to OXM here.