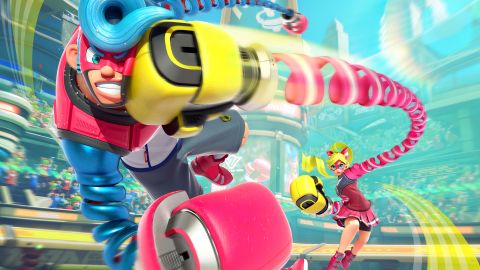 An accessible and captivatingly strange new breed of versus fighting game, Arms is another Nintendo knockout for Switch.

You might have noticed a change in tack from Nintendo lately. As a hardware maker and game developer, it’s always gone its own way, but in recent years it’s started to tinker with existing genres and tropes, to great success. Splatoon took a good, long look at online shooters and came at them from a fresh angle. Breath of the Wild, meanwhile, gave established open-world conventions a vigorous shake-up. Arms sees the Mario Kart team effortlessly shifting genres, approaching the one-on-one fighter with a view to bringing a load of crazy new ideas to the table. As you’ve no doubt already gathered from the star rating above, Nintendo’s fulfilled its goal, and then some. Now that’s just showing off.

While Arms shares Splatoon’s spirit of mischievous invention, it also delves deeper into its maker’s extensive back catalogue. There’s plenty of the cartoonish pugilism and bold character designs of Punch-Out!!, as well as the accessible physicality of Wii Sports boxing, and a sprinkling of the chaotic unpredictability of the Super Smash Bros. games. But while it may be a chimera of disparate ideas and influences, it’s one with a strong sense of its own identity.

At its core, Arms is built around a fairly conventional rock-paper-scissors formula that’s not a million miles away from – of all things – Dead or Alive’s triangle system, with blocks replacing holds here. So single-arm punches can be absorbed by blocking, which can be circumvented by a grab, which in turn is rendered ineffectual by punching between your opponent’s outstretched arms. You won’t need to practice quarter-circle inputs or repeat training drills to master combos: once you’ve learned how to dash, jump and charge attacks, you’ve got all the tools you need to deal with any opponent.

If that sounds worryingly simplistic, rest assured: it’s not. This isn’t a Street Fighter, where a punch lands almost instantaneously; instead, whether you’re pressing a button or thrusting either Joy-Con forward, you’re sending out notice of your intention to punch. Each fist, you see, is attached to a springy arm, which you can bend towards your rival with the analogue stick or a twist of your wrist. At times, it’s less like a fighting game, and more like a shooter – albeit one where you’re firing oversized bullets attached to bungee ropes, so they snap back towards you once the cord is fully taut.

Yes, it sounds weird; perhaps even a little off-putting. And yet, against all reasonable odds, it works. Any Arms battle is an invigorating blend of graceful movement and slapstick violence, with fighters dancing cautiously around one another, pausing only to sporadically slap one another in the face, or to deliver a meaty haymaker to the gut. Each hit is accentuated by palm-buffeting rumble feedback that only makes it all the more satisfying when you duck behind a pillar and arc an electrically-charged glove around and into your opponent’s jaw.

Those simple systems are lent breadth by the wide range of available arm types. If your aim is a little wayward, you might prefer to equip larger fists, or the faster-moving party poppers that fire projectiles in a spiral. Facing an evasive opponent? Tag them with the unpredictable Slamamanders – two squirming mitts that expand into a whip with tremendous range – or arcing chakram. Defensive players can keep themselves protected with shields or whirling parasols. And the vast majority of fists have elemental strengths that emerge once they’re fully charged, producing mini cyclones to blow rivals away, or frosty beams that can freeze them in their tracks.

As you’d expect, character picks make as much difference as your choice of arms. Silver-screen star Twintelle, whose fists are attached to her corkscrewing curls, can float briefly in mid-air, her star power slowing incoming attacks. The teenaged Mechanica can also hover, albeit via the jet boosters attached to her tanky mech suit, which, while lacking manoeuvrability, can keep her upright for longer. Ribbon Girl can jump repeatedly and charge her fists by quickly dropping to the ground, while robot cop Byte is ably assisted by canine partner Barq, who will sporadically launch punches of his own.

Stages offer more than just cosmetic variety, too, with trampolines around the edges of Spring Stadium, giant test tubes to hide behind in Helix’s gloomy DNA Lab and Min-Min’s Ramen Bowl predictably dipping in the centre. As a general rule, holding the high ground is a smart tactic – after all, it’s easier to punch down than up – and that’s particularly true of the stone steps on Ninjara’s stage. The spherical explosives that drop in on occasion to spice things up are particularly deadly here, since punching them will see them bounce downward, with little room on either side to avoid them.

In Arms, no fight is a foregone conclusion, and these bombs are just one of a number of ways with which you can turn a near-certain defeat into a squeaky victory. The more punches you throw, the more your rush meter will fill, allowing you to launch a rapid flurry of blows that can deal huge damage to your rival – assuming they don’t dodge or block them. Periodically, tonics for your rush and health gauges will hover above the arena, acting as restoratives as long as you remain close enough. These circular zones naturally draw both players in, a smart way to potentially make a spectacle out of a stalemate.

And what a spectacle it is, with its ten-strong roster of fighters, each big, beautifully animated and lovingly detailed; characters that could sit alongside the Overwatch cast in a group photo and it’d take a while for anyone to notice. Even with various fists and arms – Min-Min’s noodles criss-crossing with Master Mummy’s bandages and Ninjara’s steel chains – flying around, with elemental effects and chunky damage numbers besides, the action somehow always stays readable.

In the short term it’s riotously entertaining, then, but eventually you might wonder if Arms has enough long-term hooks. Sure, it’ll take a while to conquer the Grand Prix mode’s seven difficulty settings – especially since it gets pretty tough by Level 4 – and there are plenty of other game types besides. But the process of unlocking all arm types for every character is a needless grind, not least as you’re not guaranteed a new one for each go on the arm-grabber attraction.

It’s a minor gripe, and one you’ll soon forget when you get into the online lobby system, which is brilliant. The true essence of Arms is found in Party Match mode, which throws a group of players into a room and randomly places them into different game types. Standard one-on-one matches, 2v2 brawls where the fighters on each team are tethered, and free-for-alls with three or four competitors are interspersed with volleyball and basketball variants (which you’ll probably hate at first, until you figure out how best to play them) and a target-smashing interlude. Once your match is over, you’ll see simple snapshots of how the others are progressing, and while you’ll rarely be left waiting for long, you can fill any lulls or get in a bit of hitting practice with a warm-up mode.

Should you be thrown in with anyone who’s a little beyond your skill level, meanwhile, the game will redress the balance by reducing the health bar of anyone with a four-win streak or more, and handing struggling players a lucky break care of a full rush bar from kick-off. You can switch characters and arms at any time without having to duck out, while a short countdown will warn you when it’s time to confirm your selection. Between this and the Friend matches that let you pick custom rule-sets and exclude any game types you’re less keen on, only those averse to online multiplayer will be left feeling short-changed. Ranked Matches are handled with similar intelligence: activate a search and you can play any of the Grand Prix and Versus modes while you wait for a challenger.

ARM yourself - ha! - with the very best accessories available for Nintendo Switch

Arms’ most glaring shortcoming, in fact, is the one thing it first seems to get so gloriously right. For a while you might, like me, be convinced that motion controls are the only way to play, the inherent delay between action and response deliberately baked into the design. But while it offers advantages its more traditional alternative lacks (like throwing punches in the opposite direction to the one you’re moving in), the simple truth is that you can always rely on sticks and buttons to do what you want, whereas the same is only mostly true of the default scheme. If mapping block to L3 feels awkward, it’s clearly a conscious choice to even the odds – and it’s still quicker and more intuitive than tilting both Joy-Cons inward. The first ‘hardcore’ motion-control game? Not quite.

Beyond that, you could quibble over the odd character mismatch, the occasional cheap tactic, the lacklustre training mode. Otherwise, what’s not to love? While Arms’ offbeat rhythms won’t necessarily suit all palates, this hectic and thrillingly distinctive fusion of brawler and shooter is a taste worth acquiring. It’s conflict, and it’s compromise, and it’s very, very exciting.

An accessible and captivatingly strange new breed of versus fighting game, Arms is another Nintendo knockout for Switch.