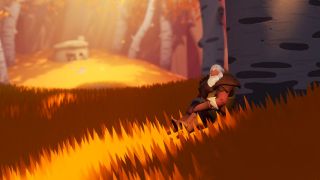 Usually, when games stir emotion it’s because of writing or events. Things happen, people talk and, honestly, the experience isn’t that much different from a film. The interactive element invests you in things more than passively viewing a movie, but the big payoff’s usually via dialogue or a cut scene. It’s rare that something weaves its emotional matter from gameplay alone in the way Arise does: making you express, experience and interpret its story yourself, through play.

Obviously huge spoilers ahead if you’ve not played it yet. So if you are interested, do that before you read anymore.

This too shall pass

The basic plot is simple: you play a nameless, Nordic old man who’s died. Everything begins with the Man burned on a funeral pyre, waking alone in a bright, snowy afterlife. Arise sees you reliving his life, through all its warming glories and cold defeats, looking back at who he was in the end, and how he got there. The time manipulation mechanic is the ‘sell’ - moving events back and forth to solve various puzzles - waters rise and fall, platforms shift in and out of reach - but the real star is how the game verbalises its existential processing through the pad alone. It uses symbolism and imagery from the Man’s memories to create spaces, challenges and threats for you to traverse as much as interpret.

It starts simply enough: the initial levels, 'She' and 'Joy', recount the Man’s early life. A happy childhood expressed through vibrant colours, huge plants and snails made giant from a child's perspective. The music swirls and soars through these adventures - life, and the love of it radiate from the screen. While the level 'Romance' is a silver screen Hollywood musical dance of waterfalls, fireflies and pirouetting lily pads, swept along by weeping strings. The imagery conjured from memories of first love, and the boat ride that led to a kiss. The only clarity comes from occasional statues and effigies that lead you through levels and bookmark these key moments.

But it’s the darker levels that really show how powerfully Arise expresses its message without words. The level 'Alone' sees the Man separated from the girl he will eventually marry. His world literally falls apart as you navigate collapsing rocks and paths to try and find your best friend. It’s here that the concept of self-doubt rears its head. As the Man gets further away from his own people, shadowy spectres of himself line the way ahead, threatening to overwhelm and consume him at every turn.

It's a gift to exist, and with existence comes suffering

The chapter 'Ashes', however, is where everything developer Piccolo has been building up to really comes to a head. After the shapeless, hopeful joy of impending fatherhood that forms the previous level 'Fruit', everything is torn down when the child dies in infancy. When Ashes begins you/the Man can’t even initially go on - the character collapsing every few steps as you try to walk away from the memory of your child's funeral pyre. But you try to continue because that’s what life is. Pushing through a world of burning thorns, fire consuming the future lost while doubt demons wait in the shadows, ready to claim you should you falter.

In a beautifully constructed analogy, the Man has to both face and use the flames and the thorns that now fill his life. To confront the very destruction of his life to proceed. Using the fire to burn a path and hold the doubt demons back, he can push on through the thorns. It’s an acutely constructed expression of grief: to go on you have to face the only thing you don’t want, which is to go on. There’s nothing good here, but all you can do is continue.

Your reward is a level called Solace. A fractured scattering of abstract platforms that you have to rejoin, physically bridging the gaps torn between the Man and his wife from the loss of their child, their world physically shattered. It’s a bleak and mournful expression of the rebuilding relationships have to go through following tragedy. The final steps see you pulling back together the broken statue of their first kiss, rebuilding the people they remember being before.

These sad, painful moments resonate more because the game doesn’t tell you how to explicitly feel, it just presents the events. The imagery is clear, symbolic, and designed with purpose, but, without language, how you process it is something only you’ll know. I wish I could say it ends well, but the man’s life is what it is. The good and the bad together. The close of the game might be called 'Hope', but it’s cold and icy, images of his life frozen in glacial slabs, unchangeable and sealed in the past as the light dies. In Arise's final moments the old Man takes a seat by the side of his wife’s statue as a young woman, holding a swaddled baby, and fades away. I think the Man chose that moment, despite everything that came after, for his eternity. But that’s just me, which is the whole point. Maybe you’ll read the whole thing differently.