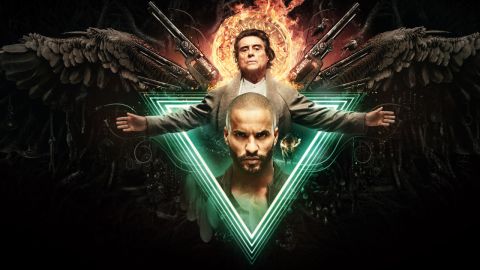 Splitting up the characters gives us more Laura and Mad Sweeney gold, but this comes at a price

Episode 2’s title is The Beguiling Man, but American Gods can’t seem to decide which beguiling man in particular to focus on. Whereas American Gods season 2, episode 1, for all its flaws, got all the Old Gods in one place, the second episode of the series is split between four groups of characters with a handful of flashbacks, all of which jolt the storyline into a disjointed, uneven thread that only just salvages itself with the unmissable Mad Sweeney (Pablo Schreiber) / Laura (Emily Browning) chemistry and a powerful finale. Warning: there are spoilers below, so only read further if you've seen the episode!

So, Shadow (Ricky Whittle) is kidnapped and the mysterious Mr Town (Dean Winters), working for Mr World (Crispin Glover) , wants answers. Coincidentally he has the same questions many of us do, the biggest of which is why, oh why, do you just do whatever you’re told, Shadow? You would think that that particular question would set up an episode to explore Shadow’s past and reasoning, but I’ve got bad news: The Beguiling Man only partly fulfils that hope. Instead we get given a handful of flashbacks that half-explain Shadow’s peculiar attachment to travelling around and his inability to believe in gods, which - although being brilliantly written - do come across as a bit too poetic when what we’re all thirsting for right now is solid answers, and don’t even get me started on its tame depiction of racial prejudice in ‘90s America! A whole episode dedicated to Shadow’s childhood would have done his backstory justice (and provided us with clearer answers), but alas, it wasn’t to be.

But don’t worry, Shadow: Laura and Mad Sweeney are coming to the rescue. As always, the dialogue between the two is a shining beacon of chemistry, even if there is a rapid change of heart from Laura at one point and a startlingly quick fix to one of their problems that comes out of nowhere. From beginning to end the pair makes the episode worth sticking around for. Unfortunately the same can’t be said for the Mr Wednesday (Ian McShane) and Mr Nancy (Orlando Jones) duo, who act like forced comedic relief in their brief (I’m talking two minutes, tops) scenes that feel like they’re just there to remind us that yes, they’re still on the road to an unannounced destination. Breaking up their back-and-forth with some actual dialogue about, I don’t know, the death of a fellow god in the previous episode would have made their scenes make more sense in this episode’s big picture, but again, no luck there.

Although the remaining glimpses of the New Gods’ activities are brief and disrupt the central storyline of Shadow being tortured with Laura and Mad Sweeney in hot pursuit, there’s no denying that they’re damned good. Bilquis’ (Yetide Badaki) barely-contained fear at withdrawing from the war during her conversation with Mr World is exquisite, as is her speech about Love and War being the opposites and her fundamental opposition to being part of something that tears people apart. Yet her wisdom about Mr World’s tactics is undeniable, and does show us why Mr World is oh-so eager to have her on his side.

Getting to see the New Gods in situations other than menacingly preaching to Mr Wednesday is very welcome indeed, but if only they had more of the episode dedicated to their antics rather than being split up. Tech Boy’s (Bruce Langely) hunt for Media continues, and showing us that she can’t really hide from him because he is the technology she uses to entrance mankind hints that the New Gods aren’t as united as they would appear as their domains - and therefore their power - overlaps much more than the Old Gods.

Out with a bang

The ending redeems some of the episode’s flaws though, in an action-packed finale that shows Laura and Mad Sweeney in glorious harmony, and even Mr Wednesday’s road trip ends up having a purpose, although I’m still bemused about his scenes with Mr Nancy. This is when American Gods shines: When everyone is in the same place bouncing off of each other, not split up and fractured. With so many key characters apart, The Beguiling Man clearly couldn’t decide who is most worthy of its attention, but dividing them up in such clearly-marked sections is a mistake the season hopefully won’t repeat.

After a new TV show to binge? Check out our list of the best new TV shows 2019 has to offer, or look below to see what to keep an eye out for this year!

Splitting up the characters gives us more Laura and Mad Sweeney gold, but this comes at a price