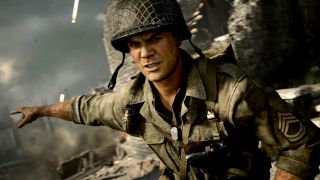 That means, no matter the timeline, a Call of Duty movie will eventually be happening in some form or another. It’s inevitable, and a recent report from Variety suggests Sicario 2 director Stefano Sollima is coming on board as the potential helmsman for the project, which remains in the early stages of pre-production over at Activision Blizzard Studios.

Given that Call of Duty essentially started out as ‘War Movie: The Video Game’, stealing from every available genre trope in the filmmakers’ playbook, the very concept of a Call of Duty movie almosts sound like a tautological paradox on paper. A war film based on a video game franchise heavily inspired by war films? Doesn’t exactly get your heart racing, does it?

This problem only becomes more noticeable when you remember that the best thing about Call of Duty has always been the fact that it's a video game. You’d seen the war movies, now Activision was promising a simulation so aesthetically resemblant to those movies that it let you be a part of that backdrop like never before, putting you in the shoes of a soldier and seeing how you’d cut it on the frontlines.

Remove that interactivity, and you’ve ripped out the key component that made Call of Duty special in the first place, and are left with a fairly bog standard war story that almost instantly sounds like any other westernised military flick to have hit theatres over the last two decades.

Then there’s the fact that Activision Blizzard is looking into the possibility of a Call of Duty cinematic universe. As any DC fan will tell you right now, you can’t just expect to cook up a cinematic universe from scratch if you haven’t bought any of the crucial ingredients. You have to work hard at it, for a long time, slowly laying each puzzle piece on the table before weaving those threads into a digestible tapestry. It’s taken Marvel ten years to perfect the formula; something tells me Activision Blizzard won’t be so patient.

If the Price is right

But a Call of Duty movie could work. Given the ideal circumstances, that is. It largely depends on which game, or setting, its based upon. Current reports suggest a present day backdrop inspired by Call of Duty 4: Modern Warfare, but the franchise’s best title in its discography is ironically the least inspiring choice for a movie adaptation.

Yes, Captain Price is one of the series’ few truly memorable characters, and the Modern Warfare saga does offer a neatly packaged beginning, middle, and end for a potential cinematic trilogy or universe but, beyond that, Call of Duty 4 doesn’t bring anything particularly new to the world of cinema.

The salient ideas that it did grapple with in 2007 -  terrorism, nuclear armament, the changing face of warfare - have been extensively covered by filmmakers in the ten years since it first released. No, the Call of Duty movie ought to look elsewhere for its inspiration. But where could that be?

Without a shadow of a doubt, the most interesting storyteller in the circulating trifecta of Call of Duty developers is Treyarch. The Black Ops saga has travelled across time and space, intertwined all of its evolving stories into a single, (mostly) comprehensible narrative of Metal Gear-style political intrigue and international anarchism, and confidently explored the darker shades of American jingoism while simultaneously maintaining a personal focus on themes of psychosis, fanaticism, and the human cost of Cold War paranoia.

Not everything in the trilogy is perfect, particularly when you look at Black Ops 3, but there’s so much meaty material to chew on in Treyarch’s darker spin on the Call of Duty formula that filmmakers like Sollima would not be lacking for launch pads to spring from.

Even with the ideal setting established, though, there remains the question of style. Personally, I would respect the pants off of Activision Blizzard if it went all in to depict the movie from a first-person perspective. The developmental format isn’t to everyone’s tastes, but it would be reverential to the spirit of the franchise and, if deployed with the right amount of technical innovation and tonal taste, could represent the Call of Duty movie’s best gambit.

A matter of perspective

Critics were divided over Hardcore Henry, a schlocky action movie from 2016 that similarly stuck to the FPS viewpoint for its entire runtime, but at least its unique direction was something that got people talking. If video game movies are guilty of one thing in particular, it’s that they never get people talking, not for long anyway, having been sanitised and Hollywoodized to the point of near non-existence.

But a Call of Duty movie told from the perspective that it’s famous for, complete with riveting action sequences, intensely intimate conversations, and a thematically appropriate focus on war from the soldier’s point of view? Not all of it would work, but it would certainly be more interesting than the over-edited, Michael Bay-style action movies that frequently flood the box office.

Players are getting increasingly bored of Call of Duty’s typical brand of safe storytelling in gaming, and audiences have certainly grown averse to stale war stories in cinema. This isn’t to say a Call of Duty movie shouldn’t have any right to exist, but it does create a doubly pressing need for it to do something different and stand out.

Activision Blizzard Studios should use this as an opportunity to surprise and amaze the inevitably huge crowds who will gladly pay up at the box office to see it in theatres. Be something, say something, make it matter. The last thing anyone wants is a by-the-books, patriotic puff piece with the Call of Duty label slapped on for good measure. It would still make a lot of money, sure, but an interesting movie it maketh not.