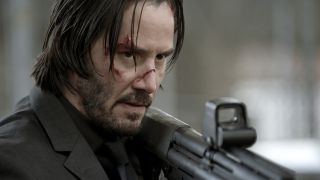 John Wick 2 is out now and it's a worthy follow up to the original’s excellent gunplay: “stunning fights, relentless action and a super-cool Keanu” says our review. Actually being John Wick, though, would be bad, and likely end in sucking chest wounds and smelling baking…

So how about we round up some games that capture that John Wick feel without the threat of blood loss and holes where there should not be holes? Most of these focus on one thing: slick gun fights. These are games that make you feel like a top of the food chain assassin, capable of taking on entire crime syndicates and winning. Plus you’ll just look damn good doing it. We could never actually be Wick, but we can dream.

Max Payne 3 is one of the purest expressions of John Wick’s ‘looking good while shooting stuff’ idea. It totally nails a professional mastery of gunplay, with nearly every level playing out like scene from the movie - one man with two pistols against impossible odds, killing everyone in showers of broken glass and bodies. Even the settings are right as you destroy nightclubs, warehouses and offices. Plus, during the flashback sections with a younger Payne you can almost kind of convince yourself it really is Keanu a little bit.

Okay, the time period’s off a little with its Wild West setting, but the dual wielding gun skills are all there. Plus it’s a story of revenge, so totally John Wick in that respect. There’s a great set of weapons to play with as well as bullet time, and dodging, abilities to make you feel like an almost supernaturally talented gunman. It’s also just a great game, with a fourth wall breaking story, as the main character’s unreliable narrator explains the plot while you’re actually playing.

The main reason GTA 5 makes such a good John Wick game in first person is it really makes the guns the star. You are Wick and, providing you’ve got the skills to match, you can mow down thugs and cops alike in your own personal ‘Holy shit I’m cool’ simulator. And, because it’s GTA you’ve basically got a massive sandbox to recreate the entire movie in. However, if you really want to see Keanu’s face and get some third person Wick action, then you can easily make a good Reeves-a-like in the character creator for GTA Online.

Absolution might not be the most popular Hitman game but it played around with one great feature - a point shooting mode that let you tag a string of enemies and take them all down in one glorious sequence of gunplay. Its sheer room clearing satisfaction makes it a totally Wick-ish guilty pleasure, and the American set game even has a glorious Continental style hotel to practice in. It’s also got some great suits, if not the hair.

This hyper violent top down shooter is probably one of the purest expressions of a John Wick fight scene: one man against many, with lots of guns and blood. True, its difficulty and rinse/repeat style of bludgeoning your way through levels might not initially seem as cool as Wick, but those moments when you nail it - sailing through impossible odds on nothing but instinct and reactions - is the stuff of dreams, and a rush like nothing else.

You could think of this as John Wick with doves. No idea why they’re there; director John Woo, who worked on the game, just likes them. In the same way as Max Payne this has a very Wick theme at its core - one man with great gun skills clears room after room of bad guys in the coolest ways possible. As well as acrobatics, this fits in some of the Hard Boiled movie’s crazier ideas like sliding down banisters or along hostess trolleys. The entire game is basically built as a shooty playground to have fun in.

Abstract? Yes. Amazingly cool? Oh Hell yes. Superhot’s unique mechanic is that time only moves when you do, meaning you can stop in a cloud of bullets to think about your next move. It creates almost Matrix-esque battles as you duck and weave between gunfire to take out your enemies. Few things are as satisfying as throwing your empty gun in an bad guy's face, grabbing their weapon as they drop it and then shooting them with it.

Actually having John Wick in your game is cheating a little bit but totally still counts. These DLC packs (which are only available on Steam for PC) introduce Wick as a playable character, along with two new heists to pull off and a weapons pack. In keeping with his movie roots, the Payday 2 character is a Hitman class, specialising in close up and ranged combat, and introduces the ability to dual wield his Chimano Compact pistols.

Okay, no cool shooting or suits here but we all know John Wick would have been a lot happier if the puppy had lived. And I’m sure we’d all rather he had the dog back than murdering his way through an entire Russian crime gang.

So let’s replace this:

Then nobody has to die and everyone gets puppies.