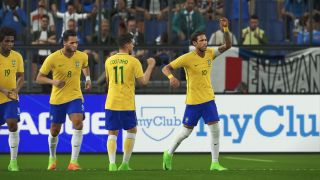 It’s all kicking off. PES 2018 has blinked first in the virtual footie stakes by offering a free week-long beta involving national teams France and Brazil. If you haven’t got round to playing it, or even if you have, you’ve probably got some burning questions: Is it as much fun as last year? Are the keepers more buffoons than Buffon? And, whisper it, is it the FIFA-killer Pro Evo fans have been waiting years for? Step right this way for all of those answers and more.

Lag-free games. THIS IS NOT A DRILL

Yep, you read that correctly. Whether you’re a PES newbie, or a battle-hardened veteran from the Master League days of Ximenez and Castolo, you’re bound to have been annoyed by PES’ previous years of choppy online connections and laggy losses. Worry no more. The beta, whilst still having considerable issues with the time it takes in matchmaking, is buttery-smooth upon starting a game. Yes, yes, it’s a beta so take things with a pinch (or should that be shaker?) of salt, but it’s definitely a positive step in the right direction. Konami’s decision to be as transparent and early as possible with this beta only shows it’s confident that it has blown off the cobwebs and can present something even remotely resembling a playable online infrastructure.

So far, this is the absolute highlight of the PES 2018 beta. Whereas FIFA’s flagship co-op mode, Pro Clubs, is ultra-competitive, the three-on-three online co-op offered up here is far more fun and forgiving. Unselfish play is rewarded smartly too: the players’ name tiles at the bottom of the screen has been replaced by a tally which notches up points for good play (a neat attacking through ball, for example, will net you a point or two). It can (and has) lead to people going out of their way to try and be the best ‘scoring’ player in the lobby, but that’s offset by a frankly brilliant wheel graph available both at half-time and full-time. Think your teammate is being a bit of a ball-hog? Want to call out someone for cutting inside and losing it every time? It’s all there – and it’s strangely addictive to see what your actual playstyle is. As you can see above, I’m the Arsenal of my lobby: loads of passes but no end product. Hardly plenty to work on, then.

The beauty of an online beta is that tactics and exploits organically develop and can be nipped in the bud if they’re too overpowered or cheaty. Take, for example, crossing. This year, crossing is more powerful than ever thanks to the rapid speed of fleet-of-foot midfielders (more on that later) but instead of a well-placed cross finding its mark, crosses are wont to cause chaos in the box as defenders flop around… and it all just comes out looking like a mess. One already-overused tactic involves pumping the ball up to Chelsea’s other big-haired Brazilian, Willian, and watching him whip cross after cross into the box. Defenders can’t deal with it, and it all comes across as a bit cheap. It’s definitely something Konami needs to zero in on before the finished product hits shelves in September. As for improvements that need to be made sharpish…

These keepers couldn't catch a cold

This is the biggest worry for PES 2018. Konami has got plenty of keeper issues to iron out, if the beta is anything to go by. The guys between the sticks routinely spill tame efforts, laughably flap at scuffed shots and, in one of my games, a looping Lacazette header is helped into the net by the goalie. The game is still a few months away but this needs to be numero uno on the list of fixes – otherwise PES is in danger of becoming a mess, but it's early days.

Seeing things from a different angle

Sometimes it’s the little things that count. The new angles for goal kicks and corners are a welcome addition, with the raised camera providing a better lay of the land than the cramped efforts of previous years. Gone, too, are the giant arrows to help you direct set pieces. A pay-off that not only makes PES feel less inherently game-y, but means – for better or worse – you’ve got to practice and practice, just like the pros. And it’s all the more rewarding for it.

Let's get physical (or maybe not)

The biggest change I noticed this year is just how smooth movement is. Counter attacks are a dream to pull off thanks to intelligent AI, and it’s now far easier to take on a player one-on- one with someone who lacks the physical requirements to bully an opponent. The lack of physicality when drifting past players (they often feel weightless) can be a little jarring but it’s a minor issue when running the show with Payet et al from attacking positions just as they would in real life. It remains to be seen whether attacking play needs to be toned down slightly – I’d suggest defenders could do with slightly more speed on the turn – but it’s a step in the right direction.

Overall, is it better than last year?

On the beta alone – absolutely. Any fears of the pace of the game being too slow and deliberate are put to rest here. It’s interesting to note that, as teams such as Monaco and Leicester have brought fast-paced attacking to the fore, PES has followed suit, and it fits the game like a glove. Keepers will undoubtedly need to be sorted out before the game goes gold, along with a few minor tweaks here and there in the name of balancing, but Konami has got something here that could turn PES from underdogs into the title-winning franchise of the early-to-mid 00s.