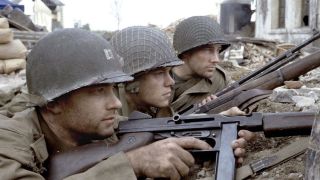 War movies are as old as cinema itself. Since people have been able to point a camera at stuff for entertainment, they've chosen to point it at conflict. Amongst other things. And while some depictions of war are pure, fantastical spectacle, designed to wow audiences with big explosions and chunky men wearing ripped camo fatigues, the best war movies tend to be more serious affairs, which deal with the horror and humanity of battle. This list is very much concerned with the more considered takes on war.

2017 saw a handful of genuinely excellent war movies released, two of which are vying for awards at the forthcoming Oscars. Darkest Hour follows the ascension of Churchill, and Dunkirk tells almost exactly the same slice of WW2 from the perspective of the soldiers and sailors involved in the evacuation of the Normandy beaches. Both make this list, for obvious reasons, and they're in good company as every entry here is a great film in its own right. Here are the best war movies ever made.

Read more: The 25 best action movies ever made

Before he became the Avengers' archer Jeremy Renner took on the role of a conflict vet, tasked with leading a explosive ordnance disposal team in Iraq. Not the most tantalising job offer, but that's the pull of Kathryn Bigelow's Oscar-winner. Despite the constant danger, for guys like Sergeant First Class William James war is a drug. He's content in the thick of it. Even when he ventures way off task, getting both he and his squad into horrible scenarios (discovering children surgically implanted with bombs), there's a sense that he's exactly where he wants to be. This is a bracing and honest look at what war does to soldiers.

Studio Ghibli has a gift for transforming somewhat harsh subject matters into lush, playful movies. The Japanese animation house outdoes itself with this stunning story, a bleak reminder that it's children who suffer the most from warfare. The use of animation achieves a power that live-action probably wouldn't have matched, as the movie follows Seita and Setsuko, two kids orphaned after American bombers destroy their hometown. Heralded by many as one of the most moving anti-war films, it's a true tear-jerker from start to finish.

One of the lesser known titles on this list, Fury follows the exploits of a single tank crew in 1945, as the Allies make their push into Nazi Germany. Don't let the pretty-boy Hollywood cast fool you - this is a war movie serious and unflinching as most, and it has plenty to say about the horrors of WW2. While Brad Pitt occasionally hams up his role as Don 'Wardaddy' Collier, it's a necessary spark of optimism as the rest of the crew - excellently portrayed by the likes of Shia LaBeouf (yes, really), Michael Pena, and John Bernthal - get picked off one-by-one in the face of overwhelming odds. It has a strong Saving Private Ryan vibe, but tells a more intimate story about the war.

Telling the story of the assassination of Osama Bin Laden, Zero Dark Thirty is probably one of the quietest war movies you'll ever see. It starts with a slow build-up of surveillance, and ends in one of the most taught battles you're likely to see. The eerie silence - punctuated by the muted thuds of suppressed gunfire - creates an unbearable amount of tension as the US Navy SEALS search for their target in the movie's climactic scenes. Slow-burning and perfectly paced, director Kathryn Bigelow quite rightly received praise for the authentic and unglamorous depiction of one of the 21 century's most infamous military actions.

Based on the experiences of two journalists during the era in which the Vietnamese communist forces, the Khmer Rouge, entered Cambodia and instigated a war with the Cambodian national army. Sam Waterson and John Malkovich play Schanberg and Rockoff, a couple of Americans who team up with local Cambodian reporter Dith Pran to capture the truth behind Pol Pot's savage regime. This is a brutal and stirring piece of filmmaking, inspired by an article written by the real Schanberg and Pran. The title refers to a number of fields where the bodies of a million Cambodians remain, after being killed and buried by the Khmer Rouge. That term was coined by Dith Pran, who saw those fields with his own eyes.

Benedict Cumberbatch is perfect for the role of Alan Turing, in this movie about how the code-breakers at Bletchley Park managed to crack the infamous German Enigma code. As with most films here it's a real thriller, but The Imitation Game has more of a heart than most, as it focuses on the life and untimely death of Turing, using the war as more of a backdrop than focus. And, much like most other great war movies, we still can't quite believe the overwhelming odds overcome by the characters, despite knowing the actual, historical events on which it's based. In fact, it makes the eventual denouement that much more tragic, as we know it's heavily grounded in reality.

Even dictators have their bad days, but humanising Hitler (while far from excusing him) makes his crimes all the greater. Downfall takes a fly-on-the-wall approach to the Fuhrer's final ten days, told through the point-of-view of his secretary. In fact, it's the real life Traudi Junge whose voice is heard opening the movie. Much was made of how the film paints a realistic portrait of a monstrous man, who displayed kindness to his staff while seconds later utter contempt for millions he sent to their deaths. It's a near-perfect piece of filmmaking, thanks to Bruno Ganz eerily-precise depiction of Hitler.

Boredom, hunger and the ever-present threat of sudden death transform an episodic story into Hollywood's definitive account of trench warfare. The original film from 1930 is the role for which actor Lew Ayers is best known, as German soldier Paul Bumer. One of several schoolboys convinced by their patriotic schoolteacher to enlist in the army, he and his friends come to learn that doing your bit for your country means sacrificing everything.

What makes Dunkirk such a great war movie? It's probably the sound. While the plot and pacing is Nolan at his peak, the acting performances excellent, and the visual effects superb... it's the sound that really takes your breath away. When all the soldiers are taking cover on the beach, for example, it's an incredible contrast between the chaos of the dropped bombs, and the eerie silence of the troops all standing up and reforming their queues. The spitfire engines? Visceral. The sound of water rushing into various boats as they sink, accompanied by the screams of drowning men? Chilling. Dunkirk isn't a thrilling war movie, or the most didactic, but the way it uses sound (or the notable absence of it) to create the menace and horror of each scene is second to none.