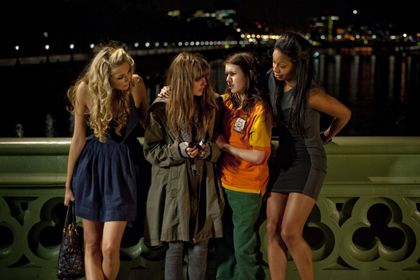 4.3.2.1 review - All hail brash ambition and brass-neck brio. Noel Clarke has both, as proven by this funky time-splicer.

Each girl’s passage is traced before rewinding to the next, as they tangle with heisted diamonds, date rape, exasperating families and aggro-dishing macho dickheads.

Clarke hobbles himself by running the weakest link first (Lovibond’s energy-sapping segment) and there’s a raggedness to most aspects of 4.3.2.1, from pacing to performance to sensibility (for all their ass kicking, this quartet have as much to do with female empowerment as the aforementioned Dolls, though they do dress better).

Compensation comes with spiky cameos from R&B singer Eve and Kevin Smith, whose plane ride with Egerton harks to his recent Twitter fracas with a sizeist American airline. And while we’re on size… When Clarke has Jo surmise that his character must have a big dick, it’s either gobsmacking egotism or a joke we didn’t get. Or both.

Hollywood teems with young tyros who have an unswerving belief in their own genius, so it’d be churlish to run down Clarke for blazing his beacon across the skies of British cinema.

His talent has yet to catch up with his ego, but you can’t help wishing more Brit indies flaunted 4.3.2.1’s verve.