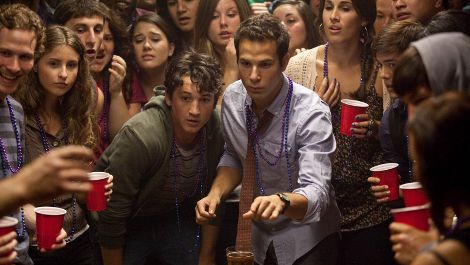 Ever since 1982’s Porky’s , there’s been a steady flow of films about awful kids going to awful parties and being awful. Written and directed by Hangover scripters Jon Lucas and Scott Moore, 21 & Over follows the vomit-spattered blueprint to a tee, as Ivy League student Jeff Chang (Justin Chon) is forced out on a bender by best friends

Casey (Skylar Astin) and Miller (Miles Teller) to celebrate his 21st birthday the night before an important interview. What follows is a massively unhilarious checklist of campus-rumpus clichés – fights with dopey jocks, sorority break-ins and slo-mo puke shots.