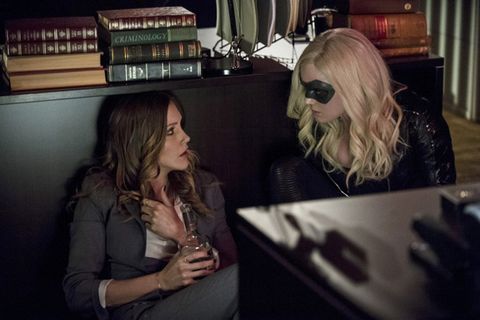 THE ONE WHERE: The Huntress returns to Starling City on a mission to take down her father – and Laurel finds herself in the middle of a hostage situation.

THE VERDICT: Here’s the second episode in a row to steal its title from a popular comics series. If “Suicide Squad” felt like an acceptable first step to bringing that mismatched misfit team to the small screen then “Birds Of Prey” feels like it’s merely paying lipservice to a beloved DC comic book. Maybe it’s just the absence of Barbara Gordon, so central to the team in the comics (and a character whose function is, admittedly, already echoed in Felicity). Or perhaps it’s the fact that the dynamic between Huntress and Black Canary becomes less about the relationship between the pair than an opportunity for other characters to weigh in with moral lessons. There's certainly little sense here of a future partnership, though it's a welcome return for Jessica De Gouw, whose performance as Helena was one of the better elements of season one.

It's an episode that wants to say important things about mercy and vengeance but it ultimately all feels just a little pat, a little hollow. The hostage situation is a well-worn trope in episodic telly and this one never feels as tense as it could be. Laurel’s seeming slide to the dark side plays like yet another attempt by the writers’ room to inject some potential into the show’s most inessential character. And the saga of Roy and Thea ends up feeling like just so many soap opera machinations. At least Felicity gets some winning moments of mischief ("Oh, I think if the Huntress shows up you should totally kick her ass...").

Notably Oliver gets to call Roy “Speedy” this episode. Only it’s swiftly undone by a line of dialogue suggesting he was simply trying to remind him of Thea, which feels as risible as that moment in Batman Forever where Robin cries “Holy rusted metal!”, only to backtrack by claiming “The ground, it's all metal. It's full of holes. You know, holey…” The gunshot to his hand also feels like another blatant bit of fan-baiting. One of these days he really will lose an arm and become Arsenal, you know.

TRIVIA: In the DCU Black Canary and Huntress teamed up with former Batgirl Barbara Gordon as Oracle to form the Birds Of Prey. The team earned a short-lived TV series in 2002, set in a near-future Gotham City seemingly abandoned by Batman.

DID YOU SPOT?: “Gail St and Simone” is, of course, a call-out to comics writer Gail Simone, responsible for a substantial run of Birds Of Prey stories.

DID YOU SPOT? 2: So is racketeer Hugo Mannheim any relation to the DCU’s Bruno Mannheim? In the comics he’s the leader of Intergang, an underworld organisation affiliated with Darkseid from Jack Kirby’s New Gods saga. Did Arrow just get quietly cosmic?

BEST LINE:
Slade: “During the attack, unfortunately I decapitated the engineer.”