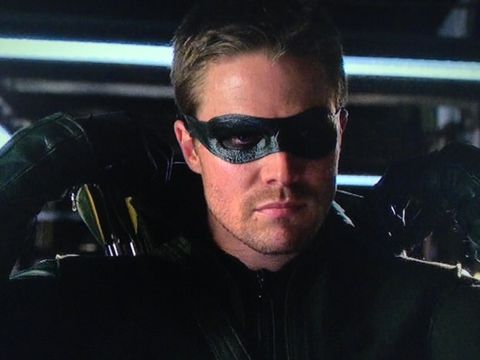 THE ONE WHERE: Oliver suffers a series of hallucinations after Barry saves his life. Slade is revealed to be alive and well and very threatening indeed.

THE VERDICT: Now this is the business: Arrow bringing it’s A-game to the concluding part of the mid-season finale. Exhilarating twists, muscular drama and agreeable fan-service; a show with a supreme confidence in its own potential for greatness. Don’t those first, faltering episodes in 2012 seem a world away?

The title nods to the trinity of phantoms in Dickens’ A Christmas Carol and while this episode wisely refrains from going full-on Scrooge there’s a sense in which Oliver earns his own redemption here. God knows the Queen boy can be a spectacular douche at times – good for Barry Allen, calling him on his distinct lack of gratitude for having his life saved (and how beautiful that Oliver’s hard-ass act was fatally undercut by a text from his mum, telling him to come home… who else laughed?). In another significant scene Oliver is made to confront the result of his decision to put an arrow in Roy’s leg, a choice that played as cold even by his standards. Ultimately he redeems himself, conquering the accusatory voices in his skull, purging his survivor’s guilt and finally rationalising the death of Tommy. And, hey, no more projectiles in mates' legs, right? He wins that mask, the one that Felicity believes belongs on a hero (Brother Blood, by neatly underplayed contrast, is told that anybody could be beneath his particular mask…)

The episode plays a brilliant double-bluff: showing us that Slade lives, revealing he’s purely an illusion that lives inside Oliver’s head like some spectre of conscience and then, in a masterful rug-pull, springing it upon us that no, he really is alive, and orchestrating events Big Bad style. Who saw that coming? His vow to “tear everything [Oliver] cares about away from him” is genuinely chilling, underlined by a fabulous piece of scoring that makes the moment feel huge.

Elsewhere director Michael Schultz delivers some equally impressive touches. In the first scene the camera urgently whirls around Barry, Dig and Felicity, circling as they battle to save Oliver. Later Slade suddenly appears, catching an arrow, the show seeming to slam impossibly between present tense and flashback mode. And Schultz brings just the right mix of knowing wink and mythic resonance to the Flash’s big origin moment, pleasing the faithful by delivering the lightning and lab chemicals of the comic book tale and adding a 21 st Century spin in the form of Starling City’s headline-grabbing particle accelerator, switched on at last to disastrous consequence...

DID YOU SPOT?: The Central City journo reporting on the launch of the particle accelerator is Linda Park. First seen in Flash Vol 2 28 in 1989, she’s the girlfriend – and later the wife – of Wally West AKA Kid Flash, inheritor of Barry Allen’s mantle in the DCU.

DID YOU SPOT? 2: Reading from the book of verse, Dig directly references Solomon Grundy, the comic book alter-ego of Cyrus Gold.

DID YOU SPOT 3?: Barry suggests that Oliver construct a mask from “compressible micro-fabric” – the same material the comic book Flash uses for his costume, which handily shrinks to fit inside a ring.

HMM: The contemporary version of Slade Wilson wears an eye-patch. In the comics he loses an eye after his wife Adeline shoots him in the face – a wound later exacerbated by Green Arrow, who stabs him in the socket. Ouch. We don’t yet know how Slade lost that peeper in Arrow continuity but there’s a nod to the second wounding in the very first episode of the series when we see a Deathstroke mask on the island, an arrow through its eyehole…

HMM 2: Oliver’s scrap with Slade was entirely hallucinatory and yet clearly real enough to cause physical damage to the lair. I’d kill to see the security cam footage of him repeatedly punching himself in the face.

BEST LINE:
Felicity: “Shado… Sarah… How many women were you marooned with? Are you sure this wasn’t Fantasy Island?”