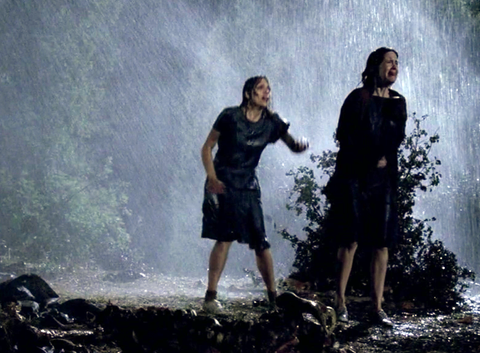 THE ONE WHERE A storm bears down on Briarcliff Manor, so the staff gather the patients together to watch a movie. Meanwhile Kit plans a second escape attempt, Sister Jude edges closer to breakdown – and Arden gets a bit happy with a hacksaw...

VERDICT This week on American Horror Story : really horrible things happen. Murder! Mutilation! Attempted rape! Yep, even by this show's standards, this is a nasty one.

The pre-titles sequence gets things off to a breathless start. Just as you're starting to think that these brief scenes of Bloody Face in the present day aren't going anywhere, Guy Out Of Maroon 5 and his girlfriend manage to escape the clutches of Bloody Face – only to be shot dead by two teens wearing Bloody Face masks. Where the hell is this going? Does Bloody Face have some sort of twisted fan following? No idea – but it's a great opening to the episode. Hopefully we'll see significantly more of the present day story as the season progresses, and not just in the final episode.

Back in 1964, a storm is coming, both literally and metaphorically. It’s the perfect opportunity for Kit and company to make another break for it. Unfortunately, they run into the results of Dr Arden's experiments in the woods. What are they? Rather gribbly mutants, by the look of it. In a season with demonic possession, aliens, mad scientists and crazed nuns, did we need killer mutants too? Actually, yeah – why not? The whole charm of this show is seeing how far it will go, after all. And that’s also assuming that they are killers, of course. They look scary, but if you were a gribbly mutant trapped out in the cold then you would look frightening. It's still too early to say what they actually want.

The escape attempt also finally gives Chloë Sevigny some significant screen time. Until now, Shelley has been a rather one-note nymphomaniac. This episode rectifies that – by putting her through hell. First she allows herself to be used (literally) as a distraction for Kit's escape, then she suffers a grim attempted rape by Arden. That she takes the time to laugh at the size of his cock is a briefly amusing moment in a genuinely unpleasant scene. And while she escapes that fate, the final scene – waking up on a table with her legs hacked off – is truly shocking. The fact that she's not dead suggests that Shelley's story hasn't fully played out. But what has Arden got planned for her? Is she going to end up as gribbly woodland mutant too? Whatever – I hope she gets payback.

Ah... Arden. This week he takes up golf. No, no of course he doesn't. It's more butchery and rampant misogyny. He's increasingly paranoid about someone watching him, and convinced that Kit is working with the CIA. Hmm... Given his generally cruel behaviour, fondness for mad human experiments and the title of the next episode – “I'm Anne Frank” – could it be that Arden is an escaped Nazi war criminal? It would certainly fit the show's lurid tone.

While Jessica Lange takes a bit of a back seat this week (though Sister Jude’s public meltdown was excellent – Lange making Jude both pitiful and pitiable), we get to see more of Sister Eunice – now very much possessed and acting like a right old loon. And wearing lipstick - shock! Personally, I'm finding this thread a little dull – though a bloody scissor attack livens things up. She did get the best line of the episode however (see below).

So, an especially violent, but hugely enjoyable episode. Next week we head into the first two-parter of the season. Expect more shock revelations, severed limbs and Arden barking “whore!” every other sentence.

THE ALIENS They're here! Sister Jude has a nasty run in with one. It looks a bit like a Grey (of course) – albeit a much more brutish and frightening one than the classic X-Files alien.

LISTEN OUT FOR The radio news report of strange lights in the sky.

BEST LINE
Sister Eunice (as she is dragged away from the movie screening): “But the Christians are about to be eaten!”