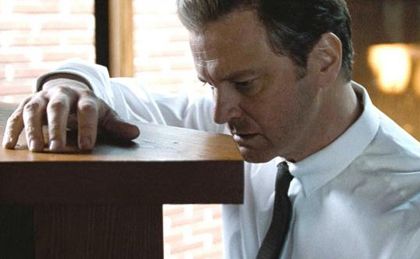 With edgy conceptual artists like Steve McQueen (Hunger) and Sam Taylor-Wood (Nowhere Boy) moving into feature directing, it was only a matter of time before a fashion designer followed their lead.

Texas-born Tom Ford is best known as the wunderkind who revived the fortunes of Gucci and Yves St Laurent, but forget any sneering remarks about ‘haute-couture movie-making’. On the strength of this debut, Ford has impressive potential as a filmmaker. Apart from anything else, he’s managed to guide Colin Firth to his finest onscreen performance yet.

A Single Man is adapted from the novel by Christopher Isherwood – but we’re far from the louche pre-Nazi Berlin of Cabaret. It’s Los Angeles in 1962, the Cuban missile crisis is looming and George Falconer (Firth) is an expat Brit teaching English Literature in college. But what darkens his mind, to the near-exclusion of all else, is the death of his long-term partner, Jim, in a car accident some months previously.

George, as Firth plays him, has chosen to adopt the mask of the prissy, buttoned-up Brit, his closed-off demeanour an unspoken reproach to the ‘let it hang out, man’ ’60s society around him. But the torment in his eyes belies his public persona. In the flashback where he receives the terrible news of Jim’s death, Ford moves into a tight close-up on Firth’s face, watching with pitiless intensity as George holds back the howl of grief wracking his whole being.

Faithful to Isherwood’s novel, the film follows him through 24 hours as he desperately searches for a reason to go on living. Being picky, you could fault the movie for being a touch over art-directed: this is, of course, the fabled SoCal where everyone is tanned, buffed and chiselled, living in Vogue-approved interiors, and the nearest to a boozy slob on offer is played by the elegant Julianne Moore. But that’s only a minor quibble to set beside the film’s emotional power.

A Single Man is controlled yet devastating.