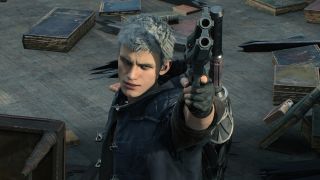 For about six years of my adolescence, I didn't really play games. More accurately, I only played one game: Runescape. That was it. As a result, my gaming library is full of holes. There are tons of classic games that I've never played, and I spent years struggling to play catch-up and fill in those blanks. Whenever I wanted to try a new series, I felt obligated to start at the beginning – to see it like longtime fans once did.

Eventually, I realized that setting arbitrary rules about 'properly' getting into a series was actively worsening my experience. Trying new games was intimidating because I felt compelled to do my homework first. So, last year, I decided to say screw history, forget evolution, and absolute bollocks to lore. I set a motto for myself: just play the new one. Jump straight to the latest entry in the series and see what all the buzz is about. Quite frankly, I wish I'd done this 10 years ago. It's changed gaming for me, and overwhelmingly for the better.

I've found that the same is true of damn near every long-running series, from Persona to God of War. I had never played a Dragon Quest before Dragon Quest 11, but I still fell in love with that game. I'll never play Resident Evil 2 because I can't get past the tank controls, but that won't stop me from enjoying the fantastic, modernized Resident Evil 2 Remake. The Legend of Zelda: Breath of the Wild was the first Zelda game I ever played – I was never a Nintendo kid – but I still found it enchanting. The only other Devil May Cry game I've touched is Ninja Theory's DmC: Devil May Cry, which is basically a non-canon spinoff, but I love Devil May Cry 5.

I'm not saying those older games are bad, but as far as I'm concerned, all of the new ones look and play so much better than their predecessors, so why wouldn't I jump straight to them? If I want to get into a new series, why wouldn't I try its latest and greatest game to see what it can really do?

The case for playing old games

Of course, this little motto works on a case-by-case basis. All the series I've mentioned thus far are pretty modular. Their stories aren't super closely connected, so skipping the old games won't really impact your understanding or enjoyment. Obviously, that's not always the case. Mass Effect is best experienced from the beginning, for instance. Uncharted 4 doesn't have the same weight without the context of the previous three games. I totally get the argument for starting with older games there. In the end, it all comes down to each game or series and what you want out of it. I care more about gameplay than story, so I'm happy to skim a plot summary if it means playing a game with refined combat and better performance.

At the same time, plenty of direct sequels can be played independently: Bayonetta 2, Gravity Rush 2, Borderlands 2, Resistance 3, Titanfall 2, Disgaea D2, The Division 2, Middle-earth: Shadow of War, Destiny 2, and even Metro Exodus to name a few. You can enjoy all of these games and get invested in their stories without playing their predecessors. Most sequels do a good job of getting newcomers up to speed as quickly as possible, so I say take advantage of that and play the new one if it interests you. And if you do like what you find and you're hungry for more, you can still go back to the old games. In my experience, working backwards through a series you've already fallen in love with is so much more fun than grinding through a preamble before playing the game that originally sparked your interest.

Pokemon Let's Go Eevee was the first mainline Pokemon game I ever played - again, I wasn't a Nintendo kid - and it sold me on the series. I love character-based, open-world JRPGs, and I always had a hunch I could get into Pokemon if the right one caught my eye. Let's Go just worked out perfectly. I finally owned a new Nintendo system, for one, and I was down to go exploring with an Eevee on my shoulder. In the past I probably would've forced myself to play Pokemon X or Pokemon Sun or whatever before trying Let's Go, and my opinion of the series probably would've soured as a result. And yes, I'm aware that Let's Go plays very differently from the other games, but it still gave me the push I needed to give the series as a whole a try. The same is true of Breath of the Wild, which inspired me to check out more offbeat Zelda games like Wind Waker and A Link Between Worlds.

Maybe you, like me, can't stand The Witcher 1 and 2 but always wanted to try The Witcher 3: Wild Hunt. Do it! The Witcher 3 is fantastic on its own and plays so much better than the first two games. If you've never clicked with Dark Souls but Sekiro looks right up your alley, go play it. Hell, you're probably better off than Souls veterans, whose muscle memory will constantly betray them in Sekiro. Never played Final Fantasy 7 but want to try the upcoming remake? Same here! And you bet your ass I'm not going to force myself to play the original game first. I can't even keep up with all the new games coming out, so I'm certainly not going to spend my time playing games which are way out of my era just to check some imaginary box.

If you genuinely enjoy getting into a series from square one, out of curiosity or otherwise, more power to you. Just don't be like me and artificially limit yourself. I'm not saying you should ignore or erase history. I'm just saying you shouldn't let a lack of experience or context keep you from enjoying awesome new games. I was terrible about this for years and years. I don't know if it came from a place of perfectionism or what, but I was constantly gatekeeping my own enjoyment. As another example, I didn't play Fire Emblem for ages because I was hellbent on playing Path of Radiance for the GameCube first. I'd convinced myself that I should start there in order get the 'full experience.' What a colossal waste of time – I should've played Fire Emblem: Awakening years ago.

I've stopped caring about the 'full experience.' Fun is more important. If you want to play the hot new thing but you've never tried or been interested in the series before, I'm here to tell you that you shouldn't hesitate to take the plunge. Just play the new one. It probably plays way better, you'll still have a great time, and who knows, you might find a new favorite series in the process.