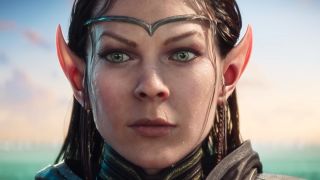 Whoa there, put that pitchfork down. I'm not here to say that the Elder Scrolls single-player games aren't amazing. I'm just saying that if a solo Tamriel experience is what you're craving, there's a rich, immersive, and deeply satisfying game already out there just waiting for you to jump in - you don't even need Elder Scrolls 6. That's right: Elder Scrolls Online is all grown up now, and with its latest addition Summerset, it's delivering Grade A questing goodness.

So far in Summerset, I've infiltrated a bunch of singing and dancing masked dandies, received a magical ass-kicking from an Indrik, and uncovered the identity of a serial killer. Even better, I haven't had to talk to a single other real human being while I was doing so. Just because Elder Scrolls Online is an MMO, doesn't mean you can't just treat it like one big solo adventure - a neverending world of strange mysteries to uncover and enemies to face. It just happens to have a few people charging through it sometimes, all on their own Elder Scrolls adventures.

One of the reasons Elder Scrolls Online can feel like a solo adventure is the ocean of lore that the designers can dip into - just scrolls and scrolls worth of locations and myths and legends and rituals. If you've played any Morrowind or Oblivion or Skyrim at all there'll be echoes in ESO, and that helps it feel like a real world.

The other is that since ESO launched back in 2014 - when it was sad, stunted little game where my first horse took it upon himself to float away entirely during a mission - the quests on offer have evolved to become something more than the stereotypical MMO busy work. Now they're individually crafted little stories, with recurring characters, significant decisions to be made, and just the right amount of jokes. Razum-dar the Khajiit - who's competing with Idris Elba's Shere Khan in the 'felines I have inappropriate thoughts about' category - is your guide to the royal machinations and magic maladies in Summerset, and he does it all with charm and almost a little wink to camera. He's been part of ESO since Dark Brotherhood, and when I saw him in Summerset it was like bumping into an old friend while on vacation. Which is sort of apt, because I spend a lot of my vacation time playing ESO.

I'm still excited about Elder Scrolls 6 too, and will spend the night before Bethesda's E3 press conference praying at my Pete Hines shrine, as usual - but I'm not sad or angry that it's taking so long. How could I be, when I can happily throw hours and hours of my life into the ESO bonfire, riding my Doom Wolf mount between the real estate portfolio I've built up, admiring my fledgling gryphon pet, or exploring the world? Over the last few years, I've uncovered (and saved) an area where the people have gone feral ('The Blood-Cursed Town' quest), crashed a wedding for the Thieves Guild ('Forever Hold Your Peace'), and even helped Chef Donolon make a special cake for the Jubilee.

They all remind me of some of my favorite quests across the years in the single-player Elder Scrolls games, and the reason I've started dipping into Skyrim yet again on Nintendo Switch. Remember in Skyrim, when you discovered the furry secret that some of the Companions were hiding? Or in Oblivion, when you had to find a missing artist by going into a painting and fighting trolls with turpentine? That same inventiveness, that same commitment to telling a story (and giving you plenty of things to hit with a sword or smite with a fireball) exists in ESO.

I'm not saying there won't be a few things to get used to - MMO combat is a little different, and the size of a new MMO can be intimidating at first, but as an RPG fan you've got this. Don't want to spend hours crafting? That's fine; my character is at the 'I've spent a lot of time playing this' Champion level and I haven't even gotten my basic woodworking certification yet. You can pick and choose how you want to play, and as someone that can't even be bothered to do a Destiny raid with my significant other, going it alone in ESO and treating it as a one-woman buffet of experience never gets in the way of the thrills and thrashings.

Some people want a game that ends; a chance to explore every inch of the world, tick everything off the to-do list, and be able to say they've 'beaten' the latest Elder Scrolls. That game will come, and when it does, I'll pre-order and be there on day one faking malarial fever so I can get enough time off work to really wallow in its majesty. For now, I'm quite happy with an endless world packed to the mudcrab-infested shores with secrets and stories. And if you just saddled up a Doom Wolf and gave it a chance, you would be too.

Elder Scrolls Online: Summerset is out now on consoles and PC, but if you're determined to pine for Elder Scrolls 6, check out this theory about its storyline.