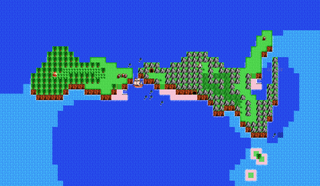 Nintendo’s pantheon of big-eyed, bright-colored cartoon stars spawned out of pools of liquid weirdness. Kid Icarus dodged one-eyed eggplant monsters, Kirby swallowed eggs and not bombs, Mario put on a bear suit and turned to stone; that’s just how it was in Nintendo games. StarTropics, Nintendo’s largely forgotten action RPG made for and only released in the west, is deceptively tame by comparison. Mike is the hero, a non-descript baseball playing milquetoast straight out of a 1990 Nickelodeon after school special. He explores an equatorial island chain looking for his lost scientist uncle and zany adventures ensue. His uncle built a two-man submarine complete with a robot helper for Mike to navigate with. On the surface, StarTropics is barely putting in the effort to distinguish itself as era-appropriate Goonies or Explorers clone. As Mike explores further into the island chain, though, his trip gets stranger and stranger until its unpredictability becomes the only guarantee.

StarTropics takes its time with the fake-out, sticking primarily with its tropical fantasy tropes through the first few levels. There’s a sea serpent waiting at the end of Star Tropics’ first dungeon on an island chock full of grass-skirt wearing, weirdly Italian-looking islanders. The second island has a big honking lighthouse and you have to save a baby dolphin from a giant octopus. Halfway through the third level, after you have to trounce a lava demigod by dunking him in seawater, StarTropics starts to get a little odd.

Lava monsters are absolutely appropriate for an island-themed adventure given the preponderance of volcanoes in famous archipelagos like Hawaii. After you soak Magma the Fierce, Mike has to continue ascending a mountain where a guru sits at the top, waiting to deliver a spell that can wake up a sleeping girl back in the village below. What the hell is a mountain guru doing on a tropical island? And why does Mike have to ride a geyser, hidden away in a dense maze and guarded by flying eyeballs, to reach him?

When Mike sails away in his sub from the island of lava monsters and ill-placed gurus, he moves onto an tropical island whose primary features are dark, peaty grass straight out of the United Kingdom, graveyards surrounding a tranquil lake, and a full-on European castle that’s home to a group of militant Amazons. The only way to infiltrate the castle is for Mike to Wong Foo it, assuming the name Michelle and getting some women’s fashion tips from a nearby fortune teller. The Amazon leader teaches Mike how to use a giant throwing star which he promptly uses to beat up skeleton dogs and a giant ghost. On a single island. In the tropics. What?

StarTropics bobs and weaves from here on out, dancing back toward convention before jabbing you in the face with weird sights and sounds. Fighting skeleton pirates? Sure that was inevitable, but learning music from a parrot to play on a giant piano so you can sink an old galleon blocking a rocky pass leading to the next island is certainly not. Finally finding your uncle studying an old meteorite deep beneath the chain’s densest pocket of islands? Makes sense! The meteorite actually contains the souls a lost alien family and you spend the rest of the game assaulting an interstellar dreadnought with a yo yo. Doesn’t make sense at all, but I am on freaking board.

It’s never as brazenly surreal, never as coated with cartoon absurdities as Yoshi or Zelda, but it is guaranteed to show you something you weren’t expecting right after you think you’ve figured it out. That’s the delight of StarTropics, even 26 years after it came out.