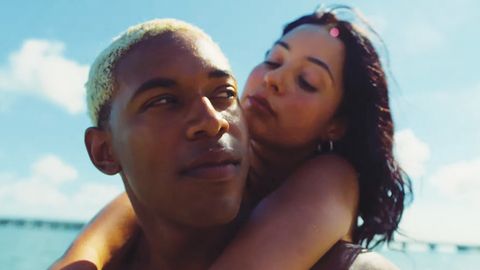 What a difference a day makes!” sings Dinah Washington repeatedly in Waves, a powerful drama from writer/director Trey Edward Shults in which the tragic events of one seismic day forever change the lives of one middle-class Florida family.

Neatly divided into two halves, the film starts by showing how bad luck and poor decisions combine to torpedo the prospects of Tyler (Kelvin Harrison Jr.), a hotshot high school wrestler with a glorious future seemingly laid out in front of him. The action then recalibrates to focus on his little sister Emily (Taylor Russell), a shy loner whose tentative romance with oddball Luke (Lucas Hedges) enables her to both emerge from her sibling’s looming shadow and bring her fractured clan back together.

As his second film It Comes At Night (2017) proved, Shults is no slouch at depicting families under stress. Here though, the threat comes not from outside but from within a household led by a brace of formidable overachievers (Sterling K. Brown and Renée Elise Goldsberry) who refuse to tolerate their children’s all-too-human fallibility. (“We are not afforded the luxury of being average!” Brown’s Ronald tells Tyler firmly, sowing the seeds for the destruction of all their ambitions.)

As events conspire to bring Tyler down, director of photography Drew Daniels has the universe literally shut in on him by narrowing the ratio from expansive widescreen to confining 1.33:1. Once Emily’s story takes over, however, the ratio reverts to 1.85:1, not just signalling a return of hope but also asserting – via a reluctant reconciliation involving a cameo turn from indie icon Harmony Korine – the restorative balm of love.