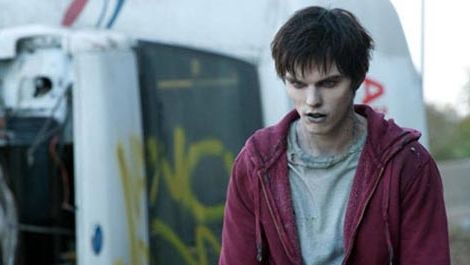 Zombie movies are ubiquitous and most sane people have had quite enough of Twilight .

As it turns out, Jonathan Levine’s adaptation of Isaac Marion’s good-natured novel is warm and witty(ish), a satirical riff on Romeo And Juliet (complete with balcony scene) for The Walking Dead generation.

So Warm Bodies is not the zombie Twilight . But it’s not as cool as it should be either, lacking the spark and flair of Baz Lurhmann’s Romeo + Juliet and the terror and scope of Frank Darabont’s sprawling show.

Like Hoult’s late teen R, Warm Bodies is packed with potential that it’s unable to properly communicate or utilise.

Certainly there’s nothing wrong with the cast - delicate, doe-eyed Hoult groans and lollops with feeling, devoted to Palmer’s capable, self-possessed Julie after he eats her boyfriend Dave Franco’s brains and inherits his memories.

“Keep you safe,” murmurs R, desperate to save her from his fellow lurchers, or worse still fodder for skeletal under-zombies, the Bonies. Julie’s no damsel in distress, though - she knows her way around the artillery room as well as her military leader, zombie-hater father (an underused John Malkovich).

But while the romance is sweet, it’s too self-aware and lacks the passion to cause much swooning.

Warm Bodies isn’t exactly hilarious either. There are opportunities for laughs - Hoult and best friend Rob Corddry (also underused) have a grunt-only conversation at a bar; R tells Julie off for over-egging her zombie act - but the gags rarely get past mildly amusing.

Even the theme - everything is better if we all get along - feels compromised when the humans and zombies only unite in the fight against a common evil - the Bonies, or less socially acceptable zombies.

The soundtrack is killer (Bruce Springsteen’s ‘Hungry Heart’ brings a montage to life, Bob Dylan’s ‘Shelter From The Storm’ facilitates a rare moment of pathos) and Jonathan Levine’s got the skills - he proved his postmodern horror chops with All The Boys Love Mandy Lane , tackled first love and teen angst with integrity in The Wackness , and peppered emotional weight with comedy in 50/50 - so Warm Bodies should have been a cult gem.

Instead there’s a beating heart and a working brain here that never really come to life.