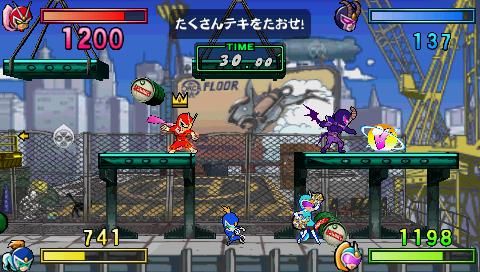 Normally, the goal in games like this (the best known is Super Smash Bros Melee ) is to be the last guy standing - it’s you against two, three or four characters in a gang-bang fight to the finish. Here, the goal is to complete one or two objectives per fight and still stay ahead of everyone else in overall points. Each chapter is divided into four parts - succeed in them all and you'll unlock new fighters, levels and admittedly snazzy animated videos.

One goal may be to grab the most diamonds that are raining down on the screen while the next is to defeat as many enemies as you can within a time limit. You can easily focus solely on the objective and ignore the competition, but no beat-em-up works like that. The three other players want it just as bad. If someone else gets in the way, you can send ‘em flying with the series’ signature VFX moves (think color-saturated Matrix).

Instead of having the reality-altering powers available from the start, they’re found in randomly appearing power-ups. Slowing down time, zooming in to enlarge yourself and catching on fire are a few of the moves fans will recognize from the traditional Joe games. Also scattered around are bizarre, black hole things that suck everyone into a 10-second, super-twitchy minigame. Once inside, you've got to instantly size up what it is you're supposed to do. They're all very simple things (bang on the buttons, time input commands) but man, are they fast.

And to this end, the game is perfectly fine. One, even two-player fights are crazy but manageable. Try to play with all four and you’ll need a vomit bag right next to you. Imagine a screen literally filled to the top with enemies, items, players, animated backdrops and who knows what else, all flying in every possible direction. If you say you can easily keep track of what's going on, you're either lying or you're a robot made out of eyes.