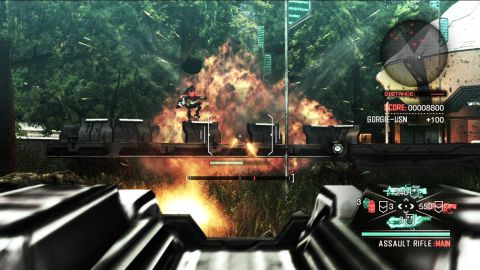 If it were possible to make a game out of the phrase “F**K YEAH!!!,” with the three exclamation points and everything, it would probably come out looking a lot like Vanquish. At least, those are the words I wanted to repeatedly yell (sans asterisks) as I drilled apart Communist robot legions with an assault rifle, executed countless rocket-powered knee-slides to escape massive chainsaw-shaped troop transports, and slowed time to gun down enemies as they roared overhead on an upside-down runaway monorail car. No other phrase quite captures the thrill of tearing ass through Vanquish’s overwhelming odds and smashing down robots dozens of times your size, unless maybe you throw in a few “grrrrs” and “rrggghs” for good measure.

If the above doesn’t paint a vivid-enough picture, Vanquish is fun. Ridiculously fun. A cover-centric, Gears of War-influenced shooter that pokes fun at that game’s grunting, gore-soaked manliness while melding it with a shiny, distinctly Japanese vision of the spaceship-and-robot-filled future, Vanquish distinguishes itself early on by being extremely fast and frantic, hurling dozens of enemies and bullets and huge, crashing set-pieces at you and daring you not to run for cover.

At the same time, the game makes you feel like a genuine badass by putting you in control of Sam Gideon, a chain-smoking DARPA researcher who’s sent to help free an American space colony/city-microwaving superweapon after it’s conquered by an army of robots controlled by the newly restored, newly rogue Soviet Russia. In addition to being gravel-voiced and nearly unflappable, Sam’s in control of a robotic super-suit called the ARS, which enables him to soak up a ton of damage, punch through steel and perform high-speed rocket slides to get wherever he needs to go. It comes with a gun that can mimic the shape of any firearm, but can only carry three “blueprints” at a time (a convenient way of explaining where Sam keeps all his guns).

It can also slow down time to enable rapid movement and targeting, which is particularly handy if you’re trying to shoot down a volley of enemy missiles, or just hammer a huge, fast enemy’s weak spot before it can turn away. (It also kicks in automatically when you’re near death, an extremely useful feature that gives you the chance to run and heal behind cover, or to get in the last few crucial hits needed to kill your enemies.)

Above: A helpful diagram of Vanquish’s many onscreen elements

Having all these cool tricks at your disposal means that, while the action can get intimidatingly thick, you’re able to charge through the danger, smash your enemies and turn their own huge turrets and vehicles against them before they even know what’s happening. It’s exhilarating, but there’s a catch: push the suit too hard, and it’ll overheat, at which point you’ll have to wait for its onboard reactor to vent and cool down. Rocket-boost for too long, or fail to disengage your bullet time before an onscreen meter runs out, and you’ll be vulnerable and weakened for a few crucial seconds. You’ll be in the same boat if you successfully punch anything, which is supremely irritating, but is probably in place to balance out the coolness of Sam’s one-hit melee kills.

Above: Still totally worth it

So, that’s about the extent of the abilities you have at your disposal. Well, that and a handful of different gun types, which along with simple upgrades are scattered liberally throughout every battlefield. These range from shinier versions of conventional firearms, like assault rifles, shotguns and sniper rifles, to more futuristic weapons like a lock-on laser, an “LFE gun” that shoots huge energy balls and a seemingly crappy disk launcher that suddenly becomes amazing when you discover it can double as a close-quarters chainsaw. Oh, and you’ll also have access to two types of grenades: frag, which blow things up, and EMP, which hilariously paralyze your enemies and make them easy targets.

Finally, you can duck behind cover to dodge volleys of enemy fire (although you’ll learn early on that this won’t keep you safe from all attacks), and while you can’t blind-fire, you can pop up to squeeze off a few aimed shots at your enemies before ducking back down. And while you may be tough as nails, sometimes it’s better to hide let the game’s ever-changing group of friendly space marines (who fight independently of you and are led by the grizzled, bionic arm-toting, even-more-raspy Lt. Col. Burns, the closest thing Sam has to a constant sidekick) take a few lumps for you.

Above: See these men? Think of them as your personal bullet-sponges

Vanquish isn’t a terribly complicated game from the perspective of what you’re able to do, but there’s a lot more to it than simple run-and-gun. Created by Platinum Games (the minds behind Bayonetta, MadWorld, Viewtiful Joe and Okami) and Resident Evil creator Shinji Mikami, Vanquish is a game that takes great pride in A) looking really pretty, B) mixing subtle parody with over-the-top ultraviolence, and B) throwing players into huge, world-shattering (sometimes literally) set pieces.