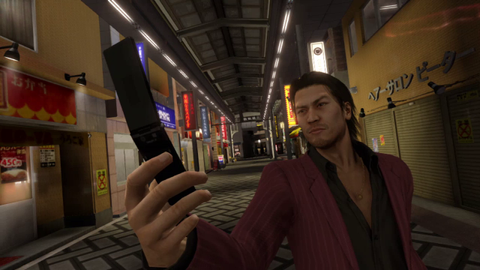 Yakuza 5's combat may feel dated, but its characters, sense of place, and absurd wealth of minigames and side activities are as fascinating as ever.

Yakuza 5 is a story about the inner workings of the Japanese underworld, a tale of scheming villains and morally righteous heroes. It's also a taxicab simulator, video game emulator, two wildly different rhythm games, a hunting and fishing game, and so much more. And while no one part of Yakuza 5 is good enough to stand on its own, all of them combine to form a video game Voltron that's way better than the sum of its parts.

The story opens on Kazuma Kiryu, a gangster-turned-cab driver who is doing his best to escape the yakuza life and coexist with polite society. But like Michael Corleone in The Godfather Part 3, just when he thinks he's out he gets pulled back in, and Kazuma finds himself embroiled in a nationwide scandal that could destroy the fragile alliance between two rival yakuza families. Kazuma is only one piece to this convoluted puzzle, though, as Yakuza 5 tells the story of five seemingly disconnected characters who are all united by a series of tragic events. The narrative unspools slowly while grounding itself in its human drama, taking the time to focus on the minutiae of everyday Japanese life while punctuating its story beats with explosive moments of conflict.

Much of that conflict comes in the form of hand-to-hand combat, and it's easily the weakest aspect of the game, as fighting Yakuza 5's various gangsters hasn't changed a whole lot since the first game. You have access to a series of basic and strong attacks that can be strung into combos, and landing hits builds up your Heat gauge that can be activated to launch a variety of super-powered attacks. Combat is a violent, brutal ballet of fisticuffs and impromptu weaponry, and while it's a vastly improved experience over previous entries, it's still stiff, repetitive, and ill-equipped to handle the swarms of foes Yakuza loves to throw at you.

It's not that combat in Yakuza 5 is bad, exactly; it just feels ancient compared to many of its contemporaries. You'll often rely on the same handful of button presses, and watching the same animations play out each time gets old. It doesn't help that Yakuza 5 loves to thrust you into fight after fight, as its avenues are filled with random people who will accost you constantly. Getting into two or three back-to-back brawls as you make your way down an alleyway, each one filled with a half-dozen mobsters, is a surprisingly common experience on the streets of Yakuza 5’s Japan.

Unlike other Yakuza games, this entry doesn't have a story recap of the other games in the series. It's unfortunate, as the weight of many of the game's biggest twists rely on your investment of its colorful cast. That said, Yakuza 5 does a decent job getting you up to speed, painting its opening moments with broad, easily understandable strokes. Still, you might want to at least peruse a wiki to get an understanding of the long, tumultuous history of the Tojo Clan.

As you earn experience, you'll unlock a repertoire of new abilities, all of which help make combat more palatable. But as you complete each chapter, Yakuza 5 forces you to switch characters - which means starting all over at square one. It makes sense thematically, but it's still frustrating to finally get into a rhythm with one character then lose access to all of their upgrades when you move on to another chapter. Eventually you'll have access to every character in the game and can switch between them at will, but it takes dozens of hours to get to that point.

And Yakuza 5 is a game you will spend a lot of time with. It's a lengthy, engrossing tale, evoking strains of Mario Puzo by way of Takeshi Kitano, but it's a slow burn, often taking hours to build up to its bigger moments. For the most part, Yakuza 5's methodical pace is to its benefit, giving itself time to explore smaller character interactions and the highly-detailed replicas of Japanese towns, but conversations can drag on, and the length of its cut-scenes gives the Metal Gear Solid series a run for its money. Brevity is not Yakuza 5's strong suit, and playing it means committing to the long haul.

It's worth tucking in, though, as Yakuza 5 provides a fascinating facsimile of day-to-day life in Japan. Many of the game's shops, bars, and restaurants can be explored, the cities' many citizens milling about on their way to wherever. Convenience stores are filled with actual Japanese brands and fully-scanned Japanese-language issues of manga like Initial D or Ghost in the Shell. Where games like Grand Theft Auto offer a parody of real life, Yakuza is sincere in its recreation of modern Japanese culture and society, and its slice-of-life portrayal is one of its biggest draws.

That's not to say it's all serious business, as Yakuza 5 also loves to get really weird, cramming as many video game genres in one title as possibly it can. When you start the game, you'll have access to a variety of taxicab missions that require you to obey traffic laws, as well as a series of street races. Eventually, you'll find a fully-developed hunting game, stand-up comedy routines, snowball fights, recreations of Taiko Drum Master and Virtua Fighter 2, freakin' dance battles, and plenty of other stuff, too. Combining so many disparate genres and minigame types sounds incredibly jarring and unnecessary, but in Yakuza's case, it totally works because it embraces its own silliness with an earnest enthusiasm. Not only are finding and completing these side missions and activities fun in their own right, they often provide you with experience points, items, and cash that you can use to make your characters stronger.

It's worth putting up with Yakuza 5's flaws just to see where it goes - and Yakuza 5 goes to some magical places. It's a game that lets you order a CD of Out Run's 'Magical Sound Shower' from your cellphone; a game that lets you try to win a Hatsune Miku doll from a UFO catcher; a game that lets you play a sidescrolling beat-em-up on a virtual reality headset crafted by a Japanese Doc Brown. It's the kind of game that gives as much as you put in, and it has a hell of a lot to give.

This game was reviewed on PS3.

Yakuza 5's combat may feel dated, but its characters, sense of place, and absurd wealth of minigames and side activities are as fascinating as ever.