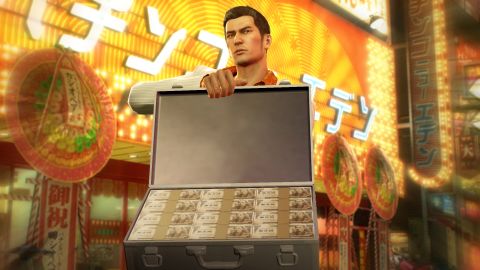 While a bit disappointing on the mini-game front, Yakuza 0 remains as strange and charming as ever, with the best story and combat the series has seen in years.

The Yakuza games are simultaneously a celebration and condemnation of excess; like a video game version of Martin Scorsese's Goodfellas set in Japan, but with way more song and dance numbers. Unless you've been following the series from its PS2 beginnings though, jumping into one of its later entries, with its four separate protagonists, web of ancillary characters, and ursine fist fights can be a daunting proposition. Yakuza 0 marks an opportunity for focus and clarity, to allow newcomers an entry point into the strange and deadly world of the Japanese underground while giving long-time fans a gripping and emotional origin story for the series' two most iconic characters.

Yakuza 0 offers a unique glimpse of 1980s Japan, a country undergoing one of the greatest economic booms in its history (and a mere handful of years before an equally great, years-long decline known as the 'Lost Decade'). Money flows out of every corner of these virtual recreations of actual Japanese towns, whether you're hitting up the local nightclub to partake in dancing minigames and drink expensive whiskey or you're punching street thugs in the mouth and watching cash dollars literally explode from their newly-unconscious bodies. Money doesn't just let you buy stuff in Yakuza 0 - this time around, it's the lifeblood of your ability and skill trees, and you'll need to earn as much Yen as you can to keep pace with its intense hand-to-hand combat encounters. Cash is so plentiful that Yakuza 0 lets you throw it around to distract people and avoid encounters, its heroes casually hurling a giant wad of Yen above their head and watching as the paper money slowly rains down. During this time, capitalism is king in Japan, and it's something Yakuza 0 reminds you of constantly.

There's no greater reminder of this than the MacGuffin which forms the backbone of its plot. A handful of powerful yakuza families vying for ownership of a tiny plot of land in Kamurocho known as the 'Empty Lot'. On its own, there's nothing spectacular about this tract of real estate. It's just a small, square, insignificant bit of dirt that's suddenly found itself valued at over a billion Yen thanks to its placement smack in the middle of a highly-profitable venture known as the Kamurocho Revitalization Project. People are willing to kill for control this tiny slice of property, and series mainstays Kazuma Kiryu and Goro Majima find themselves caught in the middle.

Kiryu is a young upstart in the Dojima clan; Majima is a disgraced yakuza who has been forced to work as the manager of a popular nightclub until he repays his debts. Yakuza 0 hops back and forth between both heroes regularly, and ends up feeling like a really great crime show, leaving plot threads and mysteries lingering just long enough before coming back to resolve them and introduce more. Its status as an origin story will help newcomers hop into the series without previous experience, and while there are plenty of cameos and callbacks which link to future moments in the Yakuza timeline, you don't need any prior knowledge (other than a general understanding of how organized crime works) to enjoy it.

As you explore Kamurocho and Sotenbori, you'll often find that your fists will have to do the talking for you, and combat in Yakuza 0 is easily the best it's ever been. It still retains much of the PS2-era brawler DNA of its progenitors, but now each character has three different fighting styles to choose from, which range from straight-forward brawling with improvised weapons, to the ability to tank up, absorb blows, and unleash earth-shattering haymakers, to a speedy, fleet-of-foot style that's basically… Well, let's just call it what it is: it's breakdance fighting. You can switch styles at any point mid-battle, letting you change your strategies on the fly if a particular foe is giving you a hard time. You'll still find yourself repeating a lot of the same combos over and over again, but the added variety in combat options certainly helps mitigate much of the repetition found in previous games. And while Yakuza 0 still looks last-gen in a lot of spots, the 60 frames-per-second afforded by the PS4 makes fighting feel snappier than ever.

Mini-games and side stories are also a core part of the Yakuza experience, and they're where the series really gets to stretch its legs and get real weird. Many of the additional quests you'll find are just as hilarious as they've ever been, leaning on the stoic sense of justice and resolute seriousness exuded by its protagonists to great comedic effect. Yakuza 0 is full of strange, one-off tales and often offers rewards which are worth the effort in addition to being genuinely entertaining (including one such quest which leads to you owning a live chicken which then helps you manage your real estate empire. No, I'm not joking).

The mini-games themselves aren't quite as interesting this time around, especially compared to previous entries in the series. You have your expected distractions, like bowling, fishing, shogi (essentially a Japanese version of chess), Sega-developed arcade games, and more, and those are all fine. Unfortunately, new ones like karaoke or slot car racing don't fill the same void left by Yakuza 5's dance-offs or hunting mini-games, and betting on battling bikini babes is as garish as it is un-fun. Your main diversion, though, will be running a business (Kazuma with his real estate company, Majima with a down-on-its-luck hostess club that he takes under his wing). Conceptually, each business is interesting, as you buy up properties or work with local establishments, hire employees, and directly manage each business to fill your coffers - they're just ruined by repetition. Once you take over the first district in your attempt to monopolize each market, you've basically seen it all - now the game wants you to do it four more times. Luckily, Yakuza 0 lets you engage with your businesses as much or as little as you want, but since you need a lot of money to buy your high-powered skills, it's a shame that these management games aren't deeper or more interesting.

But that's been Yakuza from the start: a series which toys with dozens of ideas from all kinds of games, some better than others, and throws them into a blender and wraps them up in a deliciously pulpy, hard-boiled crime drama. On that front, Yakuza 0 delivers, telling a tale full of humor, heart, and dudes ripping their shirts off in one swift motion - and if this your first time diving in, you can't go wrong here.

Yakuza 0 review: "The best and most accessible story in the series yet"

While a bit disappointing on the mini-game front, Yakuza 0 remains as strange and charming as ever, with the best story and combat the series has seen in years.