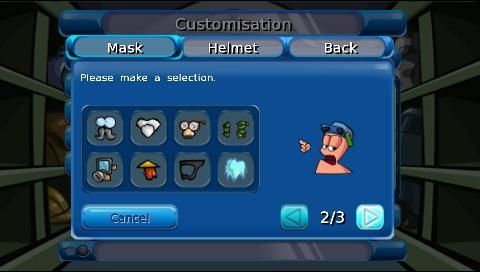 If you've played a Worms game in the last 15 years, then you've played Worms: Battle Islands. Battle Islands offers a few incremental updates to the classic Worms formula, but the core experience remains unchanged. You still have a team of Worms that you take into battle on destructible terrain. You still take turns blasting each other with ridiculous and cartoonish weapons, and the worms still spit out high-pitched quips; some of which are funny, some of which are duds (like the worms that sound like a tiny George W Bush).

Above: Quick! Which Worms game is this? Exactly

If you're not tired of the Worms formula, or you've never tried it before, it's in top form here. There are tons of wormy antics you can get up to in the single-player modes and online. You can make your way through a campaign, fighting several different themed teams. You can play one-off challenges, timed battles, multiplayer jetpack races, even a puzzle mode that gives you crazy tasks like getting to the other end of the map with nothing but a single explosive mine. If you're so inclined, you'll find hours of solid worm on worm action here. Newcomers be warned, although there are explosives involved, the pace is tactical and measured, and everything from the abundance of tutorial text and incredible load times reinforce that. It might be on a portable system, but this isn't a game you get in and out of quickly. You'll want to spend those long play sessions really honing your skills - at the higher levels, the enemy AI is capable of firing bazookas and cluster grenades with surgical precision. There's nothing more frustrating than losing a long match because you bungled a grenade launch or misfired your exploding sheep.

The level of customization on offer is impressive. You can tweak all kinds of things about your maps, your worms, your weapons, and your modes. For example, you can use the editing tools to scribble out your own destructible level, then create your own deadly explosive weapon using blueprints you find throughout the single-player campaign, and then combine the weapon and custom map into your own custom game mode and take it online. Once online you can fight other players and win rewards for your own Battle Island and worm squad through Tactics mode. The bigger your Battle Island is, the more perks you get before battle. That includes things like choosing where your worms will start, knowing the location of weapons crates, and more. One particularly nice perk involves choosing a target for an off screen sniper to shoot as the match begins. With you and your opponent choosing pregame perks, it's possible to start matches with broken terrain and dead comrades.

The online Worms competition wasn't exactly booming at the time of review though. The good news is, because of the turn-based gameplay, you can play just about every mode by passing a single PSP system around among friends; that is, if you have a group of friends that really love Worms and don't have any other system to play it on.

Above: This Worms game is all about customization. You can put all kinds of silly stuff on your worms, including a bird beak. Madness!

As solid as the core gameplay is, it's hard to shake the 'been there, done that' vibe of the whole package. Weapons, controls, sound effects, and even animations seem to have gone untouched from past games. So if the last time you played a Worms game was 1999, don't worry, you didn't miss much. Aside from the background images and a few silly new weapons and costumes, there's nothing new here visually. The plethora of game modes, customization options, and online play make this Worms game the best Worms experience available simply by default. Also, since you can make your own maps, modes and weapons, you may be left wondering where the series goes from here. If you're a longtime Worms fan, or if you've never touched the franchise before, this is as good as it gets. If you were hoping for a more progressive leap in Worms gameplay, check back in another 10 years.