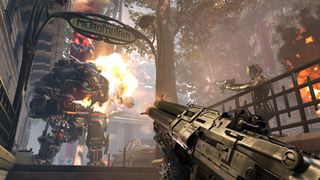 Wolfenstein: Youngblood wasn’t meant to be so important. On paper this spin-off sequel to Wolfenstein 2: The New Colossus, a prequel to Wolfenstein 3 (while not officially announced, the Wolfenstein games have been referred to by developer MachineGames as a 'trilogy'), is a spiritual successor to Wolfenstein: The Old Blood. But the play on its namesake is cover for something more remarkable. This entry in the series is taking the run-and-gun formula of old and pushing back the boundaries, embracing the open-ended flexible gameplay that Youngblood co-developer Arkane Studios is so renown for.

It’s a game that – to paraphrase Freddie Mercury and embrace Youngblood's '80s mood – 'wants to break free'. While MachineGames is the lead developer and still the franchise runner, the inclusion of Arkane Studios, famous for creating games embracing player choice and freedom like Dishonored 2 and Prey, adds a new dimension to the blood-soaked first-person shooting. This will shake things up.

"We do have a different approach this time," says Jerk Gustafsson, executive producer at MachineGames, as we sit down to chat. "This is actually the first game that we’ve ever done that has a non-linear progression."

Previously all of MachineGames' shooters have been a straight narrative run through the action; a linear flow. While the dev's DNA is still here with a story that takes place 19 years after New Colossus, and sees BJ Blazkowicz and Anya Oliwa's twin daughters Jessica and Sophia take over as the next generation of resistance fighters against the Nazis in Paris, how we experience it has shifted.

"This is the first time we have an open-ended structure so when you play through that initial shock of maps at the start and you get to the hub, which is the Resistance headquarters in Paris, then you are free to do missions and play them in whichever order you want, which is pretty exciting for us." We dig a little deeper into this new, freer structure. The maps and levels are more open than those in past Wolfenstein games.

There are also Paris district maps to nose around, too. These are broad and explorable, and from here you can discover side-missions and activities. "That's also one of the great things about working together with Arkane on this project. It's that they have brought a lot to the table with their level design skills, and I think we have something really strong in that sense," explains Gustafsson. Youngblood sees the MachineGames team trying something new and taking the Wolfenstein series in an online direction. "Multiplayer is very new to us. Of course, we do have some tacked-on and forced multiplayer components in the Riddick and The Darkness games, but this is the first time that we have ever done something that is an experience you share together with another player," Gustafsson reflects.

Embracing co-op feels perfect for MachineGames and Arkane Studios. It ensures the story-led focus the teams are known for remains intact while playfully experimenting with shades of multiplayer. And it's been hard to get right. "The complexity," says Gustafsson when we ask him what was the biggest challenge in adding co-op into the Wolfenstein shoot-from- the-hip gameplay. "There’s a lot of complexity in the narrative-driven games we’ve done before, but it’s just a different level of complexity in many ways. We have encountered new problems, and just the difficulty of having the companion be an AI companion, that's been a challenge for us. "It is a lot of new things. In many ways, if you look at the step we took from New Order to New Colossus I think the step we’re taking from New Colossus to Youngblood is a lot bigger. It's not only the co-op aspect of it but also the open-ended structure. We have added a level-based progression system in Youngblood and a lot more RPG elements and a lot more opportunities for players to customise their experience, so there’s a lot of new things for us. It’s both exciting and a little bit scary."

While the Blazkowicz twins vary in character they remain similar in their core abilities. At the start of a game you pick either Jessica or Sophia, and the other will be taken by AI or a friend. Initially you’re only able to select a set loadout for your twin –a specific ability, a weapon, and an upgrade – but as the game progresses you unlock new goodies to begin personalising how you want to play. "There are enough tools and weapons and abilities in the game for you to complement each other well in gameplay," adds Gustafsson.

An extra pair of hands

The idea of teamwork is a current that flows through everything in Youngblood. There's a subtle tug- of-war between doing things the old way and running in guns blazing, and remembering you have a partner. This is evident in the way the abilities are used, and those RPG elements Gustafsson alludes to, a new one being a cloaking skill for your Da'at Yichud power suit. These upgrades are spread across three ability trees, with 16 in one and 12 in a third, enabling you to mix and match styles of play with your partner.

Gustafsson explains how it works: "We have abilities that are suitable for stealth play, but also for the more run-and-gun playstyle. So you can complement each other through one taking a more defensive approach and staying behind the lines while one goes running and gunning. The opposite may work too, with one going in and taking out the enemies in stealth prior to setting up the other. So there are quite a few ways for the two to complement each other." Naturally for this approach to be successful you’re going to need to keep your sister alive, which is why the idea of 'lives' has been introduced to Youngblood. The new Wolfenstein games haven’t been shy about embracing classic video game mechanics, having previously ensured health packs made a welcome comeback, and this new shooter is continuing the trend.

SAVE UP TO 51% ON OFFICIAL PLAYSTATION MAGAZINE SUBSCRIPTIONS

If your sister's health hits zero she’ll fall and start to bleed out. If you reach her in time to help her then all's well and good, but fail to revive her or die in the process and you’ll need to use up your shared lives to avoid restarting the mission. "You can unlock new lives and you can renew these through co-op interactions," says Gustafsson. "This means that if you run out of them and you both bleed out then you have to restart. But you have quite a few opportunities to explore and find and add lives to your tally."

This is where Youngblood's co-op really begins to get complicated. How you play together affects how you progress, and even where you can go. Certain areas of the map are gated and can only be accessed if you work together. This can be as simple as opening a heavy door together to find hidden items or fighting in tandem to earn co-op bonuses that refill your lives tally. The more you work together and balance abilities with your ally, the more of a map you can explore.

"I think players will see a lot of similarities to level design in the Dishonored games, so in that sense it can be a little bit different as an experience but it can be for the benefit of the game, especially when it comes to finding different ways to approaching a combat scenario or a mission in general," says Gustafsson.

The two developers' ideas begin to draw together; the introduction of open-ended maps with the freedom of expression in the ability system and co-op tactics points to a Dishonored-ified version of Wolfenstein.

Gustafsson tells us the campaign is structured in such a way that you can experience everything in one playthrough, if you have the time to do so and don’t want to race through the story. And there's a set loop to how you choose and carry out missions.

The entire game is set in Paris, with Metro links to unlock in order to gain access to new areas and challenges, to fast-travel around the city to new districts brimming with opportunities. You choose the missions you want to do and when you want to do them, reveals Gustafsson. Anchoring the freedom and ensuring the narrative doesn’t flounder are vast 'oppression towers'; built by the Nazis they litter the city, and you need to fight through them to advance the story. "That's an interesting aspect and something we have built a lot of the environments around," teases Gustafsson, suggesting the Paris districts are affected by the towers’ presence.

While previous Wolfenstein games have hit the 10- to 15-hour mark for their campaigns it sounds as if Youngblood’s story will fall short of this. But as Gustafsson suggests, there’s more depth to this shooter, ensuring how you play in this world is as important as what you play. The Arkane influence lingers.

"Players will be able to stay in the game for a long time," alludes Gustafsson as he reveals Youngblood will have a purposeful endgame. Once the story is complete, and the twins are, perhaps, reunited with their father, you can re-enter the hub and enjoy extra content. "We'll add additional side-missions and new challenges once the campaign is completed. There's a lot more activities and side-missions that you can do than in previous Wolfenstein games."