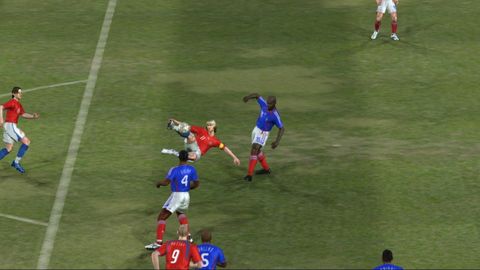 First, the bad news. Winning Eleven Pro Evolution Soccer 2007's licensing has got worse. Chelsea (now London FC) have been replaced by Manchester United (formerly Man Red), the Welsh team is captained by Gils and, most incomprehensibly, the Bundesliga has been completely erased - with Bayern Munich the only survivors.

Yet despite losing Germany, WEPES2007 retains the country's key attributes - from the mathematic efficiency of the gameplay, to the surging, unpredictable, passing movements reminiscent of Jurgen Klinsmann's gung-ho World Cup team to - sadly - the almost depressingly functional presentation, with the minimalist 'charm' of a Bauhaus industrial estate.

In fact, it's a sufficiently mixed bag for the much-improved FIFA 07 to take the contest to penalties - where WEPES2007 triumphs more emphatically, and predictably, than a German team that has only missed one spot kick in 24 years.

Put simply, WEPES2007 feels better. Passing movements are simultaneously crisper and messier than FIFA 07 - read: more realistic - since they're a direct result of the clarity of your thinking and the abilities of your players. Off-the-ball movements are more fluid, intelligent and, once again, aggravating, depending on your fellow players' ability. Shooting feels more responsive to the point of being too exacting, once again, relative to the ability of your players. Do we need to go on?

WEPES2007 feels like masterminding a team of 11 unique individuals, where each attack, agility, balance, shooting point, or playmaker ability star makes a difference - or, more importantly, feels like it makes a difference - and requires unique handling to maximise their worth. While initially intimidating, it's this scientific precision that makes it amore demanding, skillful and ultimately rewarding game.

Biggest surprise? Pace. WEPES2007 is much slower than its Japanese forebear Winning Eleven 10. It's a sim of real football and everything good and bad therein implied.