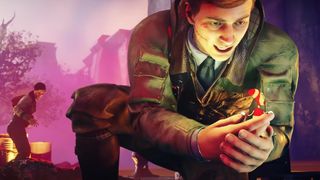 The more things change, the more they stay the same. Sure, the games of 2017 are virtually unrecognisable from the earliest slices of software we marvelled at in the early 80s, yet there's a common set of values that have always run through them. A 'good' game is one that brings us pleasure when we play; be that through the actual gameplay itself, a smart narrative, a wonderful world to inhabit, or simply eliciting a fuzzy feeling in the player. Judging by its mad-as-hell reveal trailer, and the smattering of in-game footage I've seen, Wolfenstein 2: The New Colossus looks like a 'good game'. No, it looks like a brilliant game, and one of the most exciting reveals of E3 2017.

Thing is, Wolfenstein doesn't appear to be doing anything especially creative or innovative. It isn't trying to sell the player on some fancy new technology, asking them to perform feats never before seen in other shooters, nor is its world - of Nazi-occupied America - a particularly fresh concept. Yet it oozes intrigue and insane, positive vibes from every scene of the equally mad 8 minute reveal footage. Check it out below. Go on, watch all of it - especially the 'post credits'.

Much as it was back in 1992, Wolfenstein is a pure FPS game. You turn up to shoot an increasingly tough and numerous army of enemies, with an increasingly massive and more ludicrous arsenal of weapons. That's its core, and the rest is window-dressing. Much as it did 36 years ago, Wolfenstein understands the fundamentals of what makes a shooter great - the actual gunplay itself feels satisfying, and it's the progression of the gameplay itself (not necessarily the story) that is King. Everything else in the game is designed to feed into this fundamental philosophy, and enhance it in satisfying ways. Even though I haven't played a single second of The New Colossus, it's wonderfully apparent that this is how the game is being made. Again. The 36 year old formula holds true, even if the window dressing has been made dramatically more attractive.

It's telling that BJ Blazkowitz, a character forged exclusively out of testosterone and gruff one-liners during the most macho period of history ever, feels modern and relevant in 2017. The scene where he dangles the resistance fighter over the elevator shaft and tries to convince them he's “not a Nazi” is genuinely funny, and the payoff with the dud grenade is wonderfully pitched. Blazkowitz hasn't simply become a parody of his deeply late-80s/early-90s self, though - he's contextualised beautifully within a game that knows who its hero is, and how its players expect him to be used. Even his brand new 'bullet-proof mask' is built to play with one of the most basic of shooter tropes: the headshot. He's the hero Wolfenstein needs - just as he was in New Order - and the only type of character who can realistically carry that pure FPS action this franchise has always been known for.

Even the Collector's Edition is perfect!

Pre-order Wolfenstein 2 and get this amazing Terror Billy figure. It's so good.

Even in the cut-scenes you get a sense of the enjoyment and entertainment you'll get from the game, as BJ smashes his way through an army of Nazis. It's a tease; a hint at the powers you'll wield and the sheer joy you'll have using them. Blazkowitz, being a creation of the early-90s, is allowed to revel in the violence, and he gives players an excuse to do that too.

The rest of the trailer represents a perfect taster of what's to come in New Colossus. Its supporting cast is a wonderful collection of stereotypes given fresh twists: the evil Nazi lady, the paranoid resistance fighters, the comic relief side-kicks (that scene with the robot arm and cookie made me laugh so hard). They're basic enough to understand and complement the kind of action you're getting from the game, yet quirky enough to be part of a genuinely interesting supporting cast. The friendly lunatics and the evil mad-people are perfect foils for BJ's dead-pan, 90s persona. And they all fit wonderfully into the twisted, yet colourful and recognisable version of Nazi-occupied America. Too many games try to give us the grim reality of slave-camps and mass graveyards (thanks Homefront), but Wolfenstein - at least in the trailer - recognises that this is too unrelentingly dark to fit with its aesthetic. Sure, the Nazi in the diner is sinister, but in a light-hearted way. The trick that most of the best shooters manage is to dress up what is essentially the act of repeated murder in a way that seems justified and 'feel-good'. Because they're games, and we should enjoy playing them.

And that's key; the thing Wolfenstein has always done. It makes playing a shooter feel good. It puts the shooting first, and throws everything else on top of it, because it knows that players will be happy to sample any kind of madness (what the hell is going on with that LSD trip at the end of the trailer?) if the thing they're actually doing is entertaining. This is why New Colossus is one of the standout reveals of E3. It's not fussy or over complicated, yet it still has heaps of depth and intrigue. For all its explosive bluster and action-packed variety, Star Wars Battlefront 2 failed to convince me it was a thoroughbred shooter. Anthem feels like a graphical showcase for Xbox One X and, despite the fact it'll probably be excellent, the action plays second-fiddle to the world and the 'volume of stuff to do'. Crackdown 3? It's all bluster and boasts, its sense of humour borrowed from the excellent Terry Crews.

Wolfenstein stands out a mile because it understands what shooter fans want and need. It presents its rock-solid action gameplay and cast of characters with a nod, a wink, and a surefire promise that - for the duration of the game - you're going to have shed-loads of fun. You'll laugh, you'll die, you'll get frustrated, you'll win major victories, you'll want to smash through every one of its comically evil foes. Wolfenstein understood that in 1992, it knows that now in 2017, and it's virtually guaranteed to be one of the best games you'll play this year.