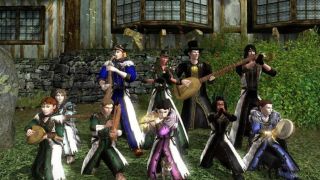 I'll admit it: I'm not really the "festival type", if there even is such a thing. But when the chance to attend a day of music inside The Lord of the Rings Online came along, I randomly generated myself a new hobbit without hesitation.

Surely, I thought, it's just all the best bits of a festival (the music, the excuse to day drink) with none of the drawbacks (the mud, the peer pressure, the mandals)? And, worst comes to worst, if I don't like it, I can just log out. There's no buyer's remorse over the overpriced junk food still gestating in the stomach, no hopeless jamming of the stinky sleeping bag back into its stuff sack, no two hour wait for the first train back to London Paddington. I'm back in my cosy living room in seconds, with not an intoxicated miscreant in sight.

But why, of all the places to attend a virtual festival, go to one in Lord of the Rings Online, a 12-year-old, free-to-play MMO? Every year, the Lord of the Rings Online community gathers together on the Landroval server at Weathertop (the hill where Frodo is stabbed by Nazgul in The Fellowship of the Ring) for a big, celebratory music festival, in which a bunch of player-run bands bring music to Middle-Earth for almost 12 consecutive hours.

It's a Lord of the Rings Online tradition, almost as old as the game itself and still going strong to this day, yet it's something that you don't typically hear about unless you're already within the game's small but steadfast circle of players. As someone who had previously spent time in developer Turbine's rendition of Middle-Earth, and had thus heard of Weatherstock but never attended the festival itself, I figured it was high time I went and saw what all the fuss was about for its eleventh annual gathering.

A wizard is never late…

The best MMORPGs to play right now on PC and console

Of course, one cannot simply just rock up to Weatherstock. As a new character, the first order of business was to gain full access to the game's open world by completing the tutorial locked within its starter zone, which, when you're a hobbit, is the picturesque village of Bree. When running through the familiar rhythms of its early game questing, it's hard to ignore the dated look and feel of Lord of the Rings Online, which is likely going to have a hard job of competing against Amazon's upcoming MMO also based on Tolkien's Middle-earth tales, but there's certainly a quiet charm to its pastoral ambience.

Even after all these years, the game's ubiquitous voice acting and soothing soundtrack, both of which hold up surprisingly well, kept me invested for the duration of the prologue, despite my ulterior motives to begin my own, more personal fellowship to Weathertop as soon as possible.

Bree, in case you're unfamiliar with Middle-earth's geography, is a fair few miles away from the Weather Hills, where Weathertop resides and – because I was such a low level character – I had no mount to ride there, nor the money to fast travel, turning what I thought would be a simple journey into a full blown pilgrimage. Thanks to a couple of fatal run-ins with several high-level enemies on the way, the expedition took over an hour, allowing for some well earned satisfaction upon finally spying Weathertop's lofty peaks across the Eriador plains, especially when bumping into fellow festival-goers heading the same way.

Unlike other video game festivals, Weatherstock is completely free to anyone who wants to attend, and there were no bouncers at the gates once I scaled the famous hill to its summit. Instead, what you'll find is a chilled, communal gathering of people who all share a passion for this mostly forgotten MMO, with a folksy vibe that's more Secret Garden Party than Glastonbury.

The bands, which rotate on a pre-arranged setlist (and are usually wearing matching outfits), either play Lord of the Rings-style covers of modern songs (one lyre-based rendition of Dragonforce's Through the Fire and Flames was a particular highlight) or bring their own compositions to the stage, and a small audience gathers around them. One of LotRO's coolest features, the ability learn and play instruments in real time, using real music, lends the festival an extra layer of authenticity over most, since the music blaring off the stage is far from automated. There's a slightly odd, surreal quality to the way the lyrics of each song aren't sung, but published above the band leader's head in time with the music, but it's otherwise all an endearingly low-key spectacle.

You can dance, clap and cheer, chat with fellow symposiasts, or – as I did – just sit and enjoy the show, pondering in quiet amazement that something like this takes place every year. Aside from the odd bad egg, there were surprisingly few examples of any griefing, spam, or even foul language from amongst the crowd or in the local chat room. Almost everyone was there to just enjoy each other's company, and celebrate the community they'd built together. That's a rare, rare thing to see in an online game, especially an MMO, and something worth treasuring even from an outsider's perspective.

There and back again

At the end of the festivities, the votes for the band of the show were tallied, and a final, encore performance from the winning group capped off the night. By that point, an unexpected storm had made its way across Eriador, making the whole thing feel somewhat like a nefarious cult gathering, or a boozy mosh up, but the change in atmosphere only prolonged the merrymaking. I stayed till the end, and – once Middle-earth's peachy sun began to rise in the east, those of us that were still hanging around eventually made the trip back down the hill as one adrenaline-buzzed caravan comprised of humans, dwarves, hobbits, and elves, before everyone said their goodbyes and dispersed in different directions across the plains.

The official Weatherstock Twitter account reports that over 700 people attended this year's event, which seems small, but any larger number, and the festival would have lost what makes it so special; it's intimacy. "Weatherstock, for me is not a labor, but an undertaking of love," said Aedon Durreah, one of the event's organisers in a follow-up post on the game's forums. "Both of the music, and those who share of their time and talents. I watched first hand the care put by the bands into the music they shared with us all. I saw our workers, title fairies, and the audience that made the trek up the mountain. And heard testament to the power of music in the songs played. And though I do not mention names here, know that I will always stand for you and appreciate your work."

One wonders what Tolkien himself would have made of something as bizarre and beautiful as Weatherstock. I think he'd have found it hilarious.