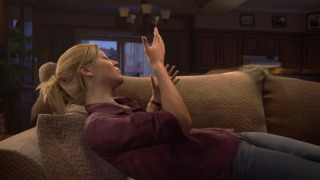 You ever heard of Garfield Minus Garfield? It's a website where the titular feline is removed from his own comic strips, painting Jon Arbuckle as a lonely and depressed man who talks to himself. Turns out, a similar thing happens when you remove Nathan Drake from Uncharted 4 - you're left with Elena, alone on the couch, talking to thin air, and oh my god it's so funny but also sad.

Alright, let's break this scene down. There's clearly no one there, so Elena is just imagining Nate's voice, right? I think this is a glimpse into the true ending of the Uncharted series, where Nathan died at the end of Uncharted 3: Drake's Deception, and Elena never moved on. Unable to let go of her past love, she's imagining the life she would've had with him, and all of the events in Uncharted 4 are in her head.

That would explain the sudden appearance of a brother she never heard of, and even in her perfect fantasy, she can't picture Nate as anything but the adventurous type, always ready to head off seeking some fabled treasure. Someone call up Nicholas Sparks, I think I've found the perfect story for his next book.