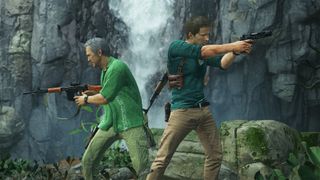 If you want to sit down on the couch with a buddy and play some splitscreen Uncharted 4, you may be waiting for a while. Maybe forever. Naughty Dog hosted a Twitch stream on the minute details of Uncharted 4 multiplayer on Wednesday, and the first question was about whether it would have local multiplayer support for its online modes.

Lead game designer Robert Cogburn said on the stream that splitscreen support, which was included for Uncharted 3, is "something [Naughty Dog is] actively pursuing right now". Unfortunately, scripting concerns and other issues kept the studio from listing it on the Uncharted 4 multiplayer roadmap, as Cogburn and Naughty Dog "didn't want to make any promises we couldn't keep".

Oh, and just so we're clear, none of this is talking about the campaign, standard online modes only. Don't expect to go co-op with the Drake brothers through the single-player story.

You can check out the full archive of the nearly 2-hour broadcast below for more details on Uncharted 4 multiplayer (the broadcast begins about 14:40 in). Or you can just fidget restlessly until the game comes out on May 10, which is my plan.