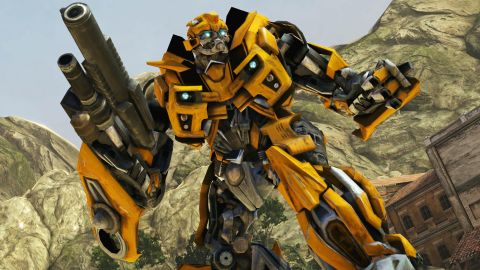 No two ways about it, Transformers: Dark of the Moon for DS is a dud. Michael Bay’s movies are loud, raucous, and filled with more explosions than a melodramatic volcano, but at least they’re never boring. Dark of the Moon DS seems content to task Transformers with leisurely strolls. In this tedious game the Transformers (either Autobots or Decepticons, depending on which version you play) are always either lumbering to the next combat area or fighting drones of polygonal shapes.

Unfortunately, when you aren’t walking or shooting you’ll be busy trying to – both are made difficult by a wildly out of whack camera, which makes the game’s snap-to-target autolock sometimes a challenge. After you’ve played a handful of missions and gotten used to the way spinning and strafing work (or don’t work), combat isn’t especially hard, but driving remains so lackluster most players will probably walk through the maps to avoid the horrendous camerawork. To its credit, DotM rarely uses the touchscreen, which is good because the few times it does are predictably clumsy and contrived.

The controls aren’t the only thing that’s difficult - the game is surprisingly hard in the beginning, but becomes less problematic as you become more powerful. In each level there are hidden upgrade orbs and because the upgrades have seriously beneficial effects, finding them is one of the most fun activities in the game. The upgrades are as diverse as the places you’ll find them – they range from shields to the fire rate of secondary weapons. When the difficulty ramps up in later levels, you can revisit prior stages to collect the orbs you missed and gain upgrades to help you beat the level. This could conceivably add a small amount of replay value to the under-four-hour campaign.

Besides the short campaign, there are a few one-on-one multiplayer modes to keep you barely interested. All the generic game types are here, including Deathmatch, Free for All, and our personal favorite Master of Cybertron, which pits you and a friend against wave after wave of enemies. The multiplayer’s certainly not revolutionary, but at least you and a friend can finally determine who’s really mastered the touchy camera.

And that’s it. A few hours after picking up the game you’ll be watching the credits roll. Unlike the other Dark of the Moon tie-ins, the DS version doesn’t even give you a deeper understanding of what happened between the last movie and the new one. Even hardcore fans will likely have trouble justifying this game’s existence.