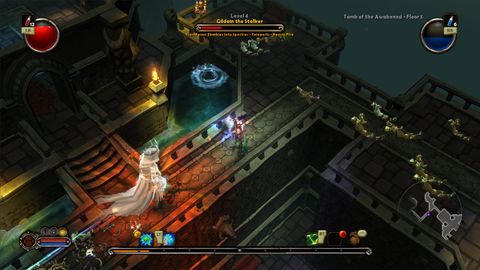 Anyone who’s ever played a game ported from PC to console knows it’s risky business. Strike that. Generally, it’s an exercise in stupidity. Sure, first-person shooters seem to have figured it out, but for every massive success like the Call of Duty games there’s a StarCraft for Nintendo 64 or Diablo on PlayStation. Some things just haven’t translated well without a mouse in years past. Don’t believe us? Just ask the Xbox 360 Final Fantasy XI players. All three of them.

Seriously, then, thank God for Torchlight.

After having played the PC version of Runic Games’ 2009 indie success to death, the idea of us tackling it with a controller was a nightmarish proposition. After merely an hour with it, though, we decided we may never go back. Torchlight for XBLA is a tighter, faster combat experience and feels right at home with an analogue stick and bumper buttons. If action/RPGs are your thing, 1200 Microsoft points will be a pretty small price to pay for what you’re getting out of Torchlight.

For those not in the know, Torchlight was developed by ex-Blizzard staff who helped cook up Diablo and later Fate for PCs. Released in 2009 for a small price tag and some pretty decent reviews, the game’s emphasis on loot grabbing and monster slaying made a success story out of Runic and gave them the room to tinker with not only the thought of a Torchlight sequel (tentatively set for this summer), but also an MMO.

With that sort of pedigree, you may not be shocked to learn that Torchlight is a dungeon crawling action/RPG. But it’s an expertly crafted one. After choosing from three basic classes – melee, magic, and marksman, basically – players are introduced to the town of Torchlight, which serves as a hub outside of the main dungeon and is home to vendors and quest-giving NPCs. After a brief scuffle outside town, the player jumps headfirst into what the locals think is a mine. That’s about where the party starts.

The main dungeon itself, like Diablo’s, is over 30 floors deep and is randomly generated, meaning that no two playthroughs are exactly alike. It also means that loot found in treasure chests and dropped by enemies is also random, and that’s what makes the game addictive. While you’ll find that most of what you harvest from a trip spelunking isn’t necessarily useful, finding particularly rare or powerful armor and weapons can be exhilarating. And though the story itself isn’t the most original out there, the need to push ahead to find bigger monsters to kill and more loot to farm makes the game hard to put down. Most floors of the dungeon are fairly short, too (maybe ten to twenty minutes give or take), making it all too easy to justify one more before hitting the sack or running off to work.

The character classes offer a wide variety of play styles, making it fun and rewarding to roll up new characters and experiment with their abilities. Multiple skill trees vary individual classes, but you can mix and match the different skills to form your perfect killing machine. Gaining these abilities comes fast and loose, too. Not only do you level up your character like in other role-playing games, you’re also given a fame meter that fills when you complete quests and kill high-powered enemies. Hit a certain threshold and you’re awarded another point for unlocking new skills and abilities. While some can argue that this makes the game a little on the easy side, the constant stream of new abilities and powering them up are another carrot to keep you hunting sub bosses and going deeper into the main dungeon.

Though Torchlight may be passed off as a Diablo II clone, it plays more like a spiritual successor to Fate, chiefly in that a pet accompanies you for the trip underground. While on a utilitarian level you can simply use the pet as a pack mule to hang on to extra items and even go topside to sell off unwanted loot, it can also be armed with spells to battle enemies and heal you, as well as jump into the fight at close range depending on how you set its behavior.

While at first it seems a bit gimmicky, the pet that you have can drastically alter the way you play the game. While it starts as a dog or cat (the XBLA version adds giant lizard option as well), feeding it fish will transform it into anything from a small gnome to a giant troll. Set it to be aggressive if you’re a mage or rogue and you can have an effective tank while you sit back and hit enemies at a distance. Or maybe you want to give it healing spells and let it passively sit behind you to keep you alive. Maybe still you want another giant melee damage dealer like you for a little boss battle assault and battery. With the amount of fish that you find throughout the dungeon, you’re given a lot of possibilities to experiment with. The pet goes a long way to separate Torchlight from other dungeon crawlers out there, and makes it a much more varied game than the typical kill-level up-find loot grind.