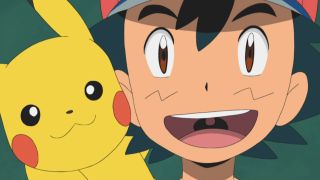 If you've been playing Pokémon since the 1990s, or have at least heard of it, you'll know it's a bit strange. As much as we've grown to love (nay obsess) over the little Pocket Monsters, the more you think about it, the weirder the  idea of pitting two animals against each other in a fight before returning them to tiny windowless cages becomes.

But then there are the theories. Regularly a Pokemon theory is just so weird that it actually makes perfect sense, and harmonises so well with the Poke-madness that it makes for a richer Poke-world. What follows are the best examples of such successful Pokemon theories - we'll try not to blow your Poke-mind! (Sorry.)

Slowpoke, second only to Magikarp and Bidoof in terms of mockery, is regularly ridiculed for its sluggishness--its Pokedex entries describe it as "incredibly slow and dopey," and say that "awake or asleep, there is little difference [for Slowpoke]." Slowpoke does resemble these remarks, sporting a perpetual glaze-eyed stare and only vaguely responding to being attacked. However, things get complicated when one notices it's a Psychic type, which are hyper-intelligent, and that it evolves into one of the smartest Pokemon in the world. One starts to wonder what exactly is going on in that poke-brain.

The folks at TVTropes came up with a mind blast of an answer: everything. Slowpoke is pokey because it's omniscient, and the constant bombardment of information leaves it detached and unresponsive to the world around it. According to this theory, a Shellder's bite (which is supposed to "inspire" a Slowbro) actually hinders Slowpoke's omniscience by grounding it in the here and now. Suddenly, it makes sense that Slowpoke evolves into the super-smart Slowking - it just needs a little, highly poisonous nibble to focus its thoughts.

All of the Pokemon games take place after a great war

Think about it. Why do you hardly ever see any adults in the game? Theres no one to stop all these ten-year-olds from running around on extremely dangerous adventures. And just why is it so important that all Pokemon trainers need to be permanently battle-ready? Because there was a great war not long before the games started that saw many adult men die and now everyone lives in a constant state of fear, even children need to be ready to defend their homes.

Its not just a lack of Father-figures that corroborates this theory though, what few adults remain can usually be found as nurses in Pokemon centers tending the wounded or as Gym leaders, training up a new generation of elite fighters. When you take on Lt Surge in Red/Blue he even tells you that Electric Pokemon saved me during the war. It also explains why all of the towns you visit are so small, there isn't much of them left...

You murdered your Rivals Pokemon

You may think you're a hero in Pokemon Red and Blue, but you're actually a bit of an asshole. Remember your rival Gary? The first few times you fight him he on your travels he uses a Raticate to sink his teeth into you. Later on you meet him in Lavender towns Pokemon tower - a massive gravesite for your little monster friends - and he asks you if you know what it feels like to have one of your Pokemon die. He also never uses Raticate again.

Its theorised that in the crowds and confusion after your last battle aboard the SS Anne he was unable to get to a Pokemon Center in time to help his friend and Raticate passed away, making you implicit in his murder. And let's not forget how you beat him down mere moments after he achieved his dream of becoming a Pokemon champion, stealing all of the praise from his own Grandfather. Not such a nice guy after all, are you?

It takes a real stick-in-the-muk to demand sound science from a world that contains electric mice, moon creatures, and malevolent balloons. It's usually easier to just cry wizard and move on, but Reddit user nameless88 apparently isn't one for easy answers. In early 2013, nameless noted that the inside of a Pokeball seems to be covered in mirrors, and hypothesized that "the pokemon is converted into light, and then bounces around inside the pokeball at lightspeed... Pokemon possess the ability to convert matter to energy, and the pokeball just exploits this."

That theory led to a landslide of other ideas, each making more sense than the last. Pokemon convert energy into matter, allowing them to manifest fire, stars, giant hands and such for their attacks. Humans and unconscious Pokemon can't be captured with a pokeball, because they can't execute the conversion. Pokemon store energy as they gain experience, and when they evolve, the massive amount they release is converted into their new bodies. Basically, this theory suggests that Pokemon is more scientifically sound than the entirety of The Core.

Cubone is a mutated baby Kangaskhan

Sometimes a theory becomes so prominent and widely accepted that fans start to believe it was developers' intention all along, and were just waiting on some leaked concept art or creator commentary to seal the deal. One widespread theory on the nature of Cubone's origins fits that bill: it asserts that when a Kangaskhan dies, her baby takes her skull and wears it, becoming a Cubone and starting a different evolution path. Morbid, right?

This theory is supported by the fact that a baby Kangaskhan has a model nearly identical to that of a Cubone, with only slight color differentiation. Further, both Pokemon share a uniquely strong mother-child connection, and no one really knows what happens to a baby Kangaskhan as it ages. The idea has become so popular that some claim it to be fact, and assert that Red and Blue's infamous Missingno glitch was actually intended to be the bridging evolution between Cubone and Kangaskhan before it was removed. Man, talk about mommy issues.

Generation I's favorite legendary critter, Mew could be regarded as the ultimate Pokemon, since it's technically all of them at once: its genetic code contains the DNA of every Pokemon in existence, and it can transform into any one at its leisure. There's only one other Pokemon capable of pulling that trick: Ditto, the mimic blob, and that's not the only similarity they share. In fact, they have enough in common that some have theorized Ditto are Mew. They've just been corrupted.

The evidence for this one is simple, but compelling. Ditto and Mew are the only two Pokemon that can use Transform. They have the same coloration, both in their normal and Shiny forms. They--stay with me here--weigh the same amount, at 8.8 pounds. Altogether, these small commonalities create a semblance that's actually pretty convincing. What corrupted the Ditto-Mews is anyone's guess--maybe they were failed clones (there's established lore in Pokemon that scientists have tried to clone Mew, that's why Mewtwo exists), or transformed so much that they forgot what they used to be. But in any case, the resemblance is uncanny--and really, what's a little amorphous blobbery amongst family?

Venomoth and Butterfree are the wrong way around

Everyone makes mistakes, its only human, so it should come as no surprise that sometimes game developers can get things wrong too. Perhaps even getting sprites swapped in the wrong way around Just look at the Caterpie-Metapod-Butterfree evolution, and compare it to Venonat-Venomoth.

Yes, they're both fairly similar flying insects, but why does Butterfree had the same bulbous red eyes and purple colouring as Venonat? And take a closer look at Metapods spiky head, it looks an awful lot like the hair/fur on top of Venomoth. No one has ever admitted that its a mistake so they've remained canon ever since, but you cant help but be doubtful when you compare them side by side.

Arceus used the Unown to create the universe

When a creature gets a nickname like "The Original One," there's a good chance it's going to be a god allegory, and Arceus is no exception: born at the beginning of existence, its Pokedex entry claims it "shaped the universe with its 1,000 arms," which seems pretty godlike. However, given that it's an equine Pokemon with only legs to speak of, one wonders just what those "arms" were--and some point to Unown as Arceus tools of creation.

Unown, weak while alone, but can alter reality when brought together: for instance, a group of them are able to create Entei and a crystal palace out of thin air. This theory suggests that Arceus uses the Unown to work its will, like in the Sinjoh Ruins, where clouds of Unown appear when Arceus manifests the egg of one of the creation trio Pokemon. For the still skeptical, consider the following: the sound made by a plethora of Unown is heard as an Azure Flute--the very item that allows for an encounter with Arceus in the wild. Concidence? Wake up, Sinnoh.

Language is weird. Just as often as words are created to describe something, the characteristics of that thing become influential in the formation of those words. An onomatopoeia, for instance, is a word that imitates the sound it describes, like boom or screech. It is effectively the source of its own name, and language changes to conform to that. Nope, this isn't your 10th grade English class, this idea just applies perfectly to the theory that Pokemon aren't saying their names at all--instead, the sounds they make influence language.

Think about it: what is the likelihood that a fire salamander would not only recognize a pun-tastic word-smush as its name, but have the vocal ability to mimic it? Isn't it more believable that early humans heard "Charmander" and saw it light stuff on fire and started to associate that to "charring" stuff? Okham's razor (Oakham's razor?) says that humans likely integrated the cries of Pokemon into language organically, showing how important Pokemon are to the development of human society. and you just learned something from magic fighting energy monsters. You're welcome.