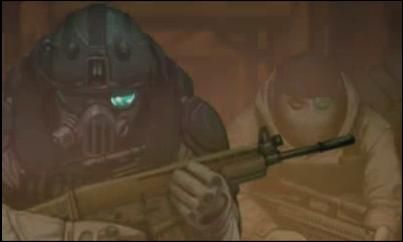 We would have done a number of naughty things to have an Advance Wars or Fire Emblem game amongst the 3DS launch line-up. Instead we have to contend with a tactics-style launch title from the Ghost Recon series. Certain branches of the Tom Clancy franchise can come off as dry and overly tactical, with early Rainbow Six games coming to mind. Ghost Recon: Shadow Wars avoids this by presenting a commando squad that would make Hasbro lawyers squint in suspicion. Yup, it's a G.I. Joe-inspired ghost team comprising one-word codenamed operatives like Haze, Banshee, and even Duke. For you foodies, there's Saffron the Medic and Mint the Engineer.

Developer/publisher Ubisoft keeps things familiar by pitting the player against the ubiquitous Russians. At first, you witness their text-based scheming in still-art cutscenes prior to each mission. Of course these power-hungry politicians have no business in the battlefield so it actually takes several hours to figure out their connection to the playable squad; this squad by the way starts off the story separated from each other due to getting shot down by a surface-to-air missile.

As with any "highly trained special mission force (TM)", your party in Shadow Wars follows a long standing tradition of having just the right mix of soldiers to deal with any given situation, although one can argue the game presents them as being too specialized at times. As the medic, Saffron is the only healer in the party - the only other way characters can heal is by picking up health packs in the field. The Snake Eyes of the team is Banshee, an all-business killer who benefits by having optic-camouflage; learning to use her is a fine test in close-quarters takedowns while making sure she doesn't stray too far from the team.

The squad traverses through the map in the typical grid based fashion where terrain impedes movement and higher elevations provide tactical advantages over enemies. It is in these areas where you have to use your noggin to survive. Fences, bushes and houses offer other tactical changes compared to more out-in-the-open gun battles and can make the difference between taking 1 or 10 hit points off the enemy. And if you position your wingmen correctly, they'll be able to help out with counter-attack support fire, something you also need to be mindful of when you're initiating attacks since enemies have support fire too.

It's been a while since we've had to remind readers of the classic RPG adage to SAVE OFTEN, and this definitely applies to Shadow Wars. There's no post-game resurrection for any downed party members. Once someone dies, it's game over. Brutal yes, but at least you can save at any time during your turn. Of course there IS the risk of saving so much that you end up with a save that gets you stuck at the fatal crosshairs of a sniper or something equally irreversible, thereby forcing you to replay the entire mission.

So save wisely because some of the 35+ missions last over an hour, and that does not even include the equally entertaining non-story Skirmish missions that you can unlock. The only other mode is the versus multiplayer which hearkens back to the Atari 2600 era of multiplayer sessions. There's no wireless versus, no StreetPass; instead you take turns on the same 3DS.

For all that you can get out of Ghost Recon, we came away from the experience feeling like this was one of the best unnecessarily 3D games available for the handheld. You certainly get a good appreciation for the terrain and foreground art like trees and electric poles, but it doesn't significantly enhance the experience. Many of you will actually be more impressed with the modern-looking menu flow and all the slick UI pop-ups that appear as the story unfolds during the briefings and mid-mission. It speaks more to the tactics/SRPG genre itself, a category where flashiness is a welcome enhancement although not a priority over gameplay

So yes, Shadow Wars could have been equally enjoyable on the DS and we would not be surprised if it was originally developed for that handheld. While we stay delusional in hoping for a Valkyria Chronicles 3D or an Ogre Battle 3D, there is no question that Tom Clancy's Ghost Recon: Shadow Wars is one of the standout launch titles for the 3DS. And we can't even fault Ubisoft if they want to spin this property off to Hasbro; at least they can retain the same characters.