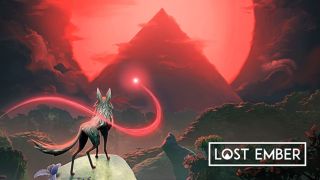 We live in a stressful time, my friends. And while it's perfectly fine to unwind with some hardcore fragging and the like, sometimes you just wanna slow down and take a deep, relaxing breath. Lost Ember from German developer Mooneye Studios looks like the video game personification of peaceful meditation, and it's freaking gorgeous to boot:

In Lost Ember, you play as a wolf led by its spiritual companion, the last soul of a once-prosperous civilization. Together you'll explore ruins, with the spirit guiding you and sharing memories. You won't be limited to your four-legged form though, as you'll also be able to take control of turtles, birds, fish, and other beasts to solve puzzles and progress through the world. Sounds a bit like Ico, but with the possession mechanic of something like Dishonored. And I am so down for that.

The game is currently on Kickstarter, seeking €100,000 / $110,509. Should it be funded, it will arrive on PlayStation 4, Xbox One, and PC in early 2018 (tentatively - Kickstarted games almost never ship on time). If there's a particular animal you want to see added to the game, you can share the Kickstarter via a special page, where each share counts as a vote toward the associated animal's inclusion. In other words, hit the share button beneath the frog, for example, and you get one step closer to the 3,000 shares needed to add the frog into the game.

Personally, I'd suggest otter, because how can you say no to this face?