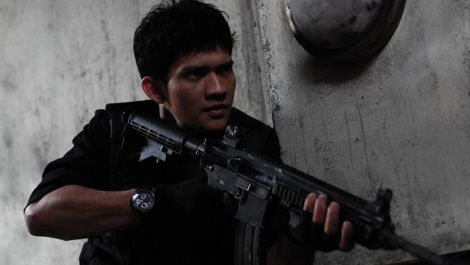 You know the world’s in trouble when even people living in utter shitholes fear their blocks getting attacked (see [Rec] 2 , The Horde and Cell 211 ). But none of these tower heists can boast the balls-to-the-wall action of The Raid , a film that more than lives up to its tagline: ‘One ruthless crime lord, 20 elite cops, 30 floors of chaos.’

Set almost entirely in a Jakarta tenement “infested” by murderous ne’er-do-wells, this Indo- Welsh ass-kicker has to be seen to be believed. And even then… The film’s set-up and synopsis is almost comically curt. Against the unforgiving heartbeat of a stopwatch, we see rookie cop Rama (Iko Uwais) preparing at home by praying, doing pull-ups and kissing his pregnant wife goodbye with a solemn oath to return victorious.

Straight away we’re en route to the eponymous assignment in a packed police van, a lieutenant instructing Rama and his nervous, heavily armed colleagues, “Our mission is simple: we go in, we take him out.” The “him” is reptilian drug lord Tama (Ray Sahetapy), who we first see blowing out the brains of five kneeling penitents, one by one.

When he reaches the fifth victim he runs out of bullets and reaches into a desk drawer for more. The item he finds (and what he does with it) tells you everything you need to know about The Raid – writer/director/editor Gareth Evans doesn’t take any prisoners, either.

By the time most films are enjoying subplots and character back stories, The Raid is knee-deep in its first set-piece – one that lasts for the next 90-odd minutes. Rama and his colleagues storm the building, someone presses a panic button and Tama puts the place into lockdown. Then his snipers open fire. Then the lights go out. Soon automatic weapons are giving way to improvised ones (fridges, doors, banisters) as survivors find new ways to carve up space, and each other.

Such is the relish with which Evans captures the crunchy gut-punches, high kicks and kill-shots making up his third feature, it may as well be him talking to the cast and crew when Tama’s voice rings through the stairwell, instructing his minions to “go to work and enjoy yourself”. A Welsh émigré married to an Indonesian, Evans first discovered pencak silat, The Raid ’s main martial art, while making a documentary about fighter Uwais and his master.

The pair collaborated on 2009’s Ong-Bak -alike Merantau before spending three hands-on months (that’s three months before pre-production) prepping The Raid ’s fight scenes with Yayan Ruhian, who plays Mad Dog, Tama’s appropriately monikered henchman. It paid off; what follows are, quite simply, some of the best, most brutal action sequences ever caught on camera.

An early highlight is a pitched battle in a pitch-black stairwell, shotguns illuminating a rogue’s gallery of wrong ’uns in strafing slo-mo. Another, which beats Old Boy in dishing the squish, sees Rama ripping throats left, right and centre with his trusty truncheon. Sometimes Evans the writer manages to match Evans the director. One scene has Rama performing field surgery with whatever he can lay his hands on.

When a bystander offers the sharpest tool available – a straight razor – the impatient patient screams, “Fuck you! Look again!” Later, the two men hide behind a wall while their foes break through the plasterboard, closer with each blow. It’s a gag familiar from Die Hard (where John McClane is crammed into a ventilation pipe while Karl peppers it with barely off-target bullets) only this time it’s a machete, not a gun.

Because Evans is more concerned with amphetamised ultra-violence than nuance, we learn about characters through clunky exposition and their fighting styles. Rama’s is mostly honourable, Mad Dog compares killing someone with a gun rather than his hands to getting a takeaway, mindful of McClane’s “Does it sound like I’m ordering a pizza?”

Although this is business as usual for the genre, it means that, unlike in Die Hard , the characters’ fates get less rather than more compelling as the film goes on, the adrenaline overload of the first half tipping towards caffeine-drink coma come the final showdown. There may be a limit to how many times you can see stratospherically talented Indonesian stuntmen panning the crap out of each other. But you won’t mind too much.

Evans has earned a mention alongside lo-fi conjurer Gareth Edwards ( Monsters ) in his mastery of have-a-go cinematic heroics. And, as The Raid whizzes by in a giddy whirl of muzzle flare, machete blades and blurring fists, one thing’s for sure – he’s raised the bar 30-storeys high.