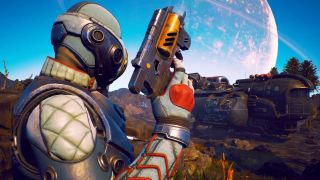 Compared to a lot of subgenres within science fiction, the space western is exactly what it sounds like, in that you're either getting one of two things. The first is a story set in the wild west which, through elaborate narrative trickery, ropes in sci-fi elements for a more fantastical cowboy romp (think Cowboys & Aliens, Wild Wild West etc.).

The second is a sci-fi story which touches on themes of revenge and retribution drawn directly from the spaghetti westerns of old (E.g. Cowboy Bebop, Firefly), where everyone and everything will usually look and act like they've been dragged partway through the set of The Good, The Bad, and The Ugly.

The space western genre itself has gone through seasonal phases of decline and resurgence across literature, TV, and film over the course of the last century, so it makes sense that we'd eventually see a similar pattern manifest in video games too. Ahead of us, for instance, we suddenly find ourselves approaching the near releases of Borderlands 3, The Outer Wilds, and Journey to the Savage Planet.

Even Destiny 2 got in on the space western action last year, with Forsaken's story being described as a "reverse Magnificent Eight" set across the sprawling galaxies of its multiplayer world. That's delightful news for fans of the genre such as myself, but is there a reason for this unexpected re-emergence of the space western video game beyond mere coincidence?

As a concept, the space western is an easy sell; one where the great frontier meets the final frontier in a marriage of two time periods (one a historical past, the other a fictitious future) that run in parallel as heavily mythologised personifications of freedom, individualism, and opportunity. The genre – thanks to its sci-fi heritage – is often used as a vehicle for sociopolitical commentary, too, particularly when it comes to questions surrounding consumer capitalism and neo-colonialism.

While it was eventually the US government who tamed and monopolised America's western border by the end of the 19th Century, it'll be the conglomerates and fat cats who own the frontiers of tomorrow. That comparison allows for a setting that can explore the ways in which such private interests might exploit that power. This form of satire is most evident in The Outer Worlds; a role-playing game set in Halcyon, "the furthest colony in the galaxy, proudly owned and operated by corporations."

Board members rule the solar system as kleptokratic kings, commercials for all manner of unnecessary products light up the colony's neo-western boomtowns like an Amazon storefront, while their brand mascots are worshipped by the consumerist public as though they were gods. With its comedic tone, developer Obsidian Games (which has already proved capable of sending up the corporatocracy in 2010's Fallout: New Vegas) is more concerned with making players laugh than navel gaze over the economic climate, but nevertheless takes its parodic humour to some unnervingly dark places, with riffs on factory farming, resource wars, and man-made environmental disasters.

On the opposite end of the space western spectrum, you can find games which lightly dip their toes into the genre's deep well of themes and aesthetics, but don't quite take the full plunge. Upcoming indie exploration Journey to the Savage Planet is more space than western, for example, but listen to the twang of its folksy soundtrack against the sights of its alien scenery, and the signs are immediately identifiable.

Similarly to The Outer Worlds, developer Typhoon is having fun at exposing the hypocracies of capitalism through those ties to the space western, with its playable character being an employee of Kindred Aerospace, "the fourth best interstellar exploration company", sent on a suicide mission by his hapless higher ups. There are no Silver Age cowboys or holographic tumbleweeds here, but Journey to the Savage Planet is instead a clear example of just how effectively the ideas and moors of the space western have crept across the full gamut of science fiction at large, even if you sometimes have to squint to notice the influence.

It's true that not all space western games make use of the genre's proclivity for subtext. Destiny 2 merely borrowed from the likes of Cowboy Bebop and Serenity to play up the revenge western aspect of its story, for instance, which just so happened to take place in space. Borderlands 3, meanwhile, has no intention of making any meaningful statements whatsoever (though its tale of weapons manufacturers mindlessly warring over a planet's natural resources certainly has a whiff of the parabolic), instead continuing in the aesthetic tradition that hails right back to the original game's americana-infused ambience.

Even without any of that political bite, though, the pulpy, eye-popping fusion of science fiction and spaghetti westerns is primordially attractive as a form of guilty pleasure entertainment at a base level, allowing for the kinds of settings and characters that look right at home on a video game box art. Cowboys & Aliens is called Cowboys & Aliens for a reason, after all.

Even so, there's an argument to made that the recent proliferation of space western games isn't just a happenstance of timing, but a reflection of our shifting cultural zeitgeist. Corporate interests, big money, and the one percent are being increasingly recognised as the public villains of 21st Century problems, be it climate change, political corruption, poverty,  systemic discrimination and, well, the list goes on.

In that sense, they're an easy and well justified target for storytellers, and while the more politically charged games of old have typically pointed their lasers at the dictators and autocracies of the world, the resurgence of the space western in video games could indicate the turning of that dial away from public office, and into the private boardrooms.

For more, check out the best new games of 2019 and beyond on the way, or watch the video below for an even better look at Borderlands 3.