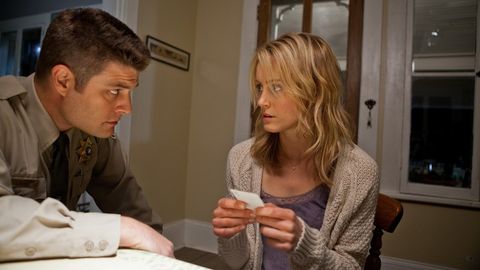 And it’s by and large the performances that elevate Scott Hicks’ ( Shine ) love’n’destiny tale from insufferable slush to mostly palatable, if run-of-the-mill, slush. The military stuff’s a red herring; there are hints of grit in the opening scenes, which follow Efron’s Logan on an ill-fated tour of Iraq, but scripter Will Fetters ( Remember Me ) slaps an ultra-corny voiceover over the top that makes it indisputably clear what type of film you’re watching.

After his discovery of a woman’s photograph in the desert coincidentally saves his life, a traumatised Logan returns home and sets out to find her. She’s Beth (Taylor Schilling), a young single mother with an unstable ex and a few painful secrets of her own.

After his initially pivotal PTSD gets swept under the rug of blooming romance, Efron’s not left with much to do besides play a ludicrously perfect cipher – a piano-playing, chess-playing, tough-yet-sensitive dreamboat who says things like “You should be kissed every day, every hour, every minute” with a straight face.

His turn’s more than solid, but the standout is relative newcomer Schilling, who brings a grounded vulnerability to the role of someone whose experiences have aged her beyond her years.

The third act is packed too full of dramatic turns for most of them to resonate, but there’s still something undeniably compelling about the unashamed melodrama of two wounded souls finding each other.