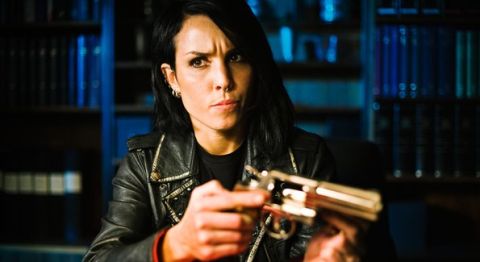 It happens when your debut’s such a surprise that any follow-up is destined to disappoint.

Stieg Larsson, the late writer of the Millennium trilogy, suffered from it and the second adaptation of a Larsson book has DSAS in spades.

Don’t abandon hope just yet, though. There’s plenty here to keep fans of Sweden’s thriller series gnawing the keratin off their fingernails.

Picking up where The Girl With The Dragon Tattoo faded out, we return to the world of goth hacker Lisbeth (Noomi Rapace) as she becomes involved in a human trafficking case run by Millennium mag and its editor Blomkvist (Michael Nyqvist).

Delving into the sordid underbelly of Stockholm’s vice industry, Fire continues the brutal dissection of the evil that men do – here, everyone with a dick is a potential rapist.

When Millennium’s exposé of trafficked girls threatens to finger politicians, cops and judges, it’s not long before bodies start to turn up.

After becoming prime suspect in the murders, Lisbeth goes on the run pursued by a 7ft blond Russian (Micke Spreitz) who feels no pain (and looks like Ron Perlman and Boris Johnson’s love child).

She also discovers some unpleasant truths about her past. Reprising her role as the emotionally damaged goth hacker, Rapace holds the movie together with ferocious intensity.

It’s a mesmerising performance that hints at vulnerability and culminates in a chilling bit of DIY torture.

Unlike the tense first film, which occasionally felt like an Agatha Christie whodunit retold by Fred West, Fire maxes out on blockbuster action (kickboxing, car chases!).

Yet, ironically, it’s also mired in an excess of plotting – one that annoyingly keeps mismatched lovers Lisbeth and Blomkvist apart for most of the movie.

Perhaps we should blame the loss of the original filmmakers, replaced here by director Daniel Alfredson (brother of Let The Right One In’s Tomas) and two new screenwriters.

Or perhaps it’s the inevitable price to be paid for setting up the third movie. But if everything that Lisbeth endures here pays off in the final chapter, The Girl Who Kicked The Hornet’s Nest should be a real stinger.