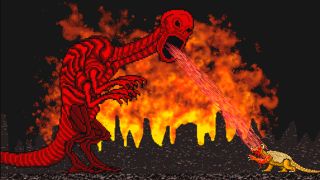 Creepypasta are urban myths for the internet age - forum users and redditors competing to tell the most unpleasant and terrifying stories. When they’re successful they can break out in a big way - Slenderman being the most famous example.

When done well they’re more than just a story, with videos and images to support the myth and helping to sell it as real. Video games are a perfect source material and vehicle, letting authors doctor screens and videos, often presenting the creepypasta as series of forum posts asking for help as they play.

Let’s take a look, then at ten of the creepiest, most terrifying video game creepypastas to ever corrupt a hard drive or cartridge.

Game: Pokémon Red and Blue
Short version: So the legend goes, the creepy music in this strange town contained high frequency tones that only the young could hear and led to a spate of over 200 child suicides in Japan, mostly by hanging. Those that survived complained of headaches and nosebleeds. A later spectral analysis of the audio revealed images of Unown pokemon spelling ‘leave now,‘ although that type of pokemon didn’t arrive until the later games.

It's not hard to see how this creepypasta started when you see the actual, creepy-as-all-hell real town in the game:

Game: Majora's Mask
Short version: Probably one of the most famous and influential creepypastas around. Meticulously written, planned and with well made supporting videos, it’s simply one of the best. It focuses on a guy called Jadusable picking up an old Nintendo 64 cartridge from a weird old man at a yard sale who tells him it used to belong to a kid who doesn’t ‘live here anymore’. When he loads it up there’s one save called ‘Ben’. As he tries to play it becomes increasingly more unpredictable - spawning characters and unkillable bosses in the wrong places, a statue follows him around, creepy music plays and Link is repeatedly killed by exploding into flames. As the game becomes more unpredictable characters begin to address Jadusable directly and elements to appear in the real world (for example, a chatbot starts talking about the game). Jadusable starts to capture and record the increasingly possessed gameplay, convinced he won’t be around later to tell anyone.

Game: Polybius
Short version: One of the better known video game myths, since made into a real game by legendary developer Jeff Minter. The original story focused on a mysterious arcade machine that appeared in 1981. While it seemed to be popular with people queuing to play it, those that did reported hearing strange noises like woman crying, or seeing brief flashes of horrible faces. Some people then developed headaches, nausea, blackouts and amnesia, with suicides also linked to the machine. One arcade owner also reported that strange men in suits appeared from time to time to collect records from the machine. Eventually, one month after it appeared, all the cabinets suddenly disappeared.

Game: Minecraft
Short version: A Minecraft player meets a mysterious player within his game, despite not being in multiplayer. The character appears in the default skin, minus the eyes, and just watches for a while before running away. The player is unable to catch up but notices lots of things are suddenly wrong in the world - impossible structures, trees with no leaves and so on. The author goes on forums to ask if anyone else has seen something similar but finds his posts are all deleted. After trying again he receives a message from a user called ‘Herobrine’ that simply says ‘stop.’ Eventually other players admit they’ve had similar experiences, and more research reveals ‘Herobrine’ is the name Minecraft creator Notch’s brother used while playing. When the author asks Notch directly if he has a brother he’s told, “I did, but he is no longer with us.” In real life Notch doesn’t actually have a brother but that hasn’t stopped players from endlessly claiming to have seen Herobrine.

Game: Morrowind
Short version: It’s a genuinely creepy account of a Morrowind fan investigating a supposedly broken mod of the game. It features a spider-like assassin figure, and weird touches like all the NPCs going outside at night to look up while saying “watch the skies.” The player investigates and finds a new island and some Dwemer ruins with a mysterious portrait room and a locked door. As he probes further he find other players exploring the mod who seem to find the boundaries between the game and real world blurring...

Game: Jack the Ripper Game (fictitious/unspecified)
Short version: A man revisits a found object game he remembers from his childhood. Despite reading warnings about it he continues playing even though several odd things have happened. After finishing the game once, he persists and discovers the painted art style switches to increasingly more realistic depictions of brutal murders. Eventually, the plot leaves historical constraints to show the Ripper killing himself horrifically and one of the investigators crucifying a businessman believed to have payed for the murders.

Game: Godzilla: Monster of Monsters
Short version: This is one of the longest creepypastas around, focusing on a Godzilla game that takes the player on an almost classical journey to hell. Glitches and strange symbols replace the classic Japanese monsters with demonic creatures and cryptic messages about a dead girlfriend. As it all descends into scenes of mutilation and abuse, the player is frozen to his seat and begins to feel all the damage his character is taking on screen during the final boss battle. It ends with a fight to survive as the player take on every bite, burn and blow from a mysterious entity called Red. It’s a dark story, beautifully illustrated with mocked up game screens, and I won’t spoil the ending.

Game: A fictional Mario 64 follow up
Short version: After Mario 64, Nintendo was rumoured to have toyed with a sequel that was more in line with increased realism and violence of PlayStation 1 games. It was an attempt to appeal to that audience, although Miyamoto claimed it was never a full game, just some test concepts. This creepypasta follows someone’s account of trying to play it and includes things like a realistic, monstrous Bowser who demands Mario’s death and then eats him. Familiar characters like Toad shun him, and, at one point, Mario enters a house with nothing but two children’s skeletons on the sofa. Mario is eventually torn apart by Bowser and left to suffer in a nihilistic purgatory. It’s a hell!

Game: A fictitious arcade machine called ‘Skull & Crossbow’
Short version: In this story a gamer and his friend, Nicholas, find a creepy old arcade machine where a young boy fights a skeleton monster call Oad, whose body extends into a snake-like column of ribs. The game’s full of blood and gore with Oad vomiting up bone weapons, eating victims and occasionally stopping to make direct eye contact with the player. Eventually, after dying in-game, the player and Nicholas tries to pull the machine away from the wall to reach the socket, convinced they can get another game by switching the machine off and on again. As the two characters move the cabinet they find the machine has no back and Oad is waiting inside. He grabs Nicholas and pulls him into the darknesses and, later, the player notices the in-game character has an extra rib.

Game: An unspecified, hacked Sonic game
Short version: Someone is sent a CD-R marked Sonic.exe by a friend who tells them to destroy it. They don’t, obviously, and start playing. They find a broken, glitchy game with only Tails, Knuckles and Dr Robotnik available as playable characters. As they try to play, they encounter dead, wounded animals and are pursued by a dark, evil Sonic with bleeding eyes. As the game is played, the various characters are hunted and apparently killed by this demonic Sonic. Eventually, the hedgehog starts to threaten the player and tries to break out of the screen to get him. The game eventually shuts down and the player thinks they’ve escaped, only to find a Sonic toy with bleeding eyes has appeared next to him on the bed, saying “keeps things interesting for me.”