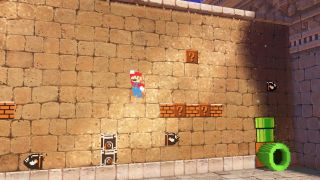 So here’s an interesting thing. I’ve played Super Mario Odyssey and honestly, I don’t much feel like writing a preview of it. I’m struggling with the idea of pinning it down into concrete words and sentences. That doesn’t really feel appropriate. I don’t want to stroke my beard about graphical fidelity, or witter about systems design, or ponder the interaction between controls and the demands of level layout. Because the really important thing is simply that two hours later, my face is still making those involuntary happy shapes, and I keep getting those excited, tingly warm feelings, and I keep jabbering and waving my arms, and grinning, all sparkly-eyed and stupid whenever anyone asks me about it. Damn, maybe I’ve got a crush on Super Mario Odyssey.

Nah, it’s fine. This is just how the best Nintendo games get you.

And I already know that Odyssey is going to be one of the best Nintendo games. I’ve been around the block enough times with Ninty, through good times and bad, to recognise that other feeling when I get it. That ‘this is something special’ feeling. That ‘this changes things’ feeling. The one that tells you Nintendo has taken one of those fundamental steps forward, above and beyond their ‘standard’ sequel evolutions. The feeling that comes with a Super Mario 64. The one that came with The Legend of Zelda: Breath of the Wild.

If I’m banging on with the f-word a lot, that’s because feeling, in all its capacities, really underpins a lot of what Super Mario Odyssey is about. It kicks in the instant I throw Cappy, Mario’s new, sentient hat-buddy for the first time. You can use him to collect coins without being close to them. You can use him to hit blocks and activate switches as you vault, hop, and bound in a different direction. You can use him to Quantum Leap into a vast number of objects, substances, and enemies, instantly taking on their properties, powers, and abilities, to harness for your own use.

He is your extended reach into the world, a fluid, tactile force that extends Mario’s ability to touch and manipulate the environment around him and everything in it. He’s an invisible sphere of extended power and influence that follows Mario at every turn, and the more you come to understand him and what he can do, the more you’ll (exponentially) come to perceive and understand a completely different kind of connection to the world around you.

While Super Mario Odyssey is an authentic, robust, finely crafted, and ludicrously-honed 3D Mario game in its heart, with all the tactile, polished, instinctive and rewarding jump-based traversal that entails, Cappy builds that framework into so much more. Cappy offers a freedom to manipulate, reinterpret, and ‘cheat’ your way through environments that, with no exaggeration of facetiousness, makes it feel like Nintendo has developed its first Immersive Sim. If The Breath of the Wild is Nintendo’s Skyrim, Super Mario Odyssey is its Dishonored or Prey.

Check out Super Mario Odyssey in the screenshot gallery above

The gratifying sense of power starts small, as I jog Mario into the centre of a large ring of coins and then collect them without leaving my spot, throwing Cappy out with a motion-controlled flick of a JoyCon and a tap of Y, before air-controlling him in my desired follow-up directions with additional swipes. It feels powerful. It feels slightly magical. But it also, wonderfully, feels obvious, the instant I pull it off.

Seconds later I’m running, climbing, and vaulting down a street, grabbing rows and formations of coins from the air without dropping a step. Minutes later, I’m traversing demanding sequences of moving platforms, high above a desert. I’m doing so while hurling Cappy into floating, motorised rollers that will launch him yet further, in order to collect distant pick-ups and activate triggers. Some of those triggers spawn laser rings that will smash barriers, allowing access to other, potentially deadly new routes we can plunder. Those lasers will also hurt me, and eventually I’m triggering three at a time, hopping and skipping between safe ground and my next destination, as I whirl Cappy around to clean up the area and further manipulate my route on the fly.

Does Mario really possess people and objects using his hat?

Not for a moment are the logistics of this tasking. They’re invigorating, and exciting, and deeply, gratifyingly fun, but the process is never intimidating. The sense of expressing my will on my surroundings is giddying, as I affect events in three directions at once, via multiple, simultaneous means. And this is just Mario’s core abilities I’m talking about. Run, jump, triple-jump, long-jump, back-flip, and Cappy. The same, pure set-up the series has used since Super Mario 64, with a new friend blowing its potential wide open in previously unimaginable ways.

After that, things get really extravagant.

Exploring the open-world New Donk City area - existence and purpose still unexplained at this stage, but I do know that it’s packed with the new Moon collectibles - I’m free to do what I want, when I want. Moon collection tasks are no longer distinct, locked-down processes, to be completed one after the other. A great many exist simultaneously, and I can veer away from any one halfway through if I spot another I want to try out. The freeform structure doesn’t stop there though. Each main World has a narrative quest-chain too, and as you progress in this, and the various side-activities, you’ll find that some Moons will trigger changes in the world, opening up new possibilities for exploration and collection. Imagine the branching structure of evolving RPG quests (side-quests and all) applied to an action platformer, and you’re about there.

And then there’s the morphing. Termed ‘capturing’ by Nintendo, what this amounts to is a blistering sense of ‘anything is possible’, in which curiosity and experimentation are always rewarded in the most unexpected and imaginative ways. Throw Cappy into an electrical generator, and you’ll follow him, becoming a spark able to traverse power cables in an instant. Sure, you could find a clever jumping route up that tempting skyscraper - and that will be perfectly fun and fine to do - or you could seek out the power-supply out back and be at the top in seconds.

You could try to find a cunning jumping route across that toxic pond - perhaps using long-jumps to take the hit and get back out before it’s too late - but you could also turn into one of the nearby rock monsters and use their innate ability to seek out invisible platforms. Stumbled upon a classic bit of bottomless pit / moving platform action? Plagued by one of those tempting deathtraps, where the tougher route promises the greater rewards? If you can tease out and capture a Bullet Bill, you can just fly through and skip the whole damn thing. Or just fly wherever you want. In these huge, free-flowing open-worlds, it feels like any newly discovered ability could lead to a new, off-kilter solution at any moment, almost by accident.

At times it almost seems like video game design by systemic Easter egg, so much of the world around you quietly waiting to trigger new environmental status changes, and shift your entire perception of your place and purpose. At other times, it feels like playing Mario by sanctioned hacks. Either way, Super Mario Odyssey is there, packed with more secrets, mysteries, and beautiful, rewarding wonders than you’d ever imagine to be lurking below its surface. Nothing is what is seems. Everything is something better. And some things are a whole bunch of different stuff at the same time. All you need to do is knock on the door and ask them.

Watch an hour of Super Mario Odyssey gameplay right here and catch up with the best upcoming games for Nintendo Switch in 2017 and beyond.