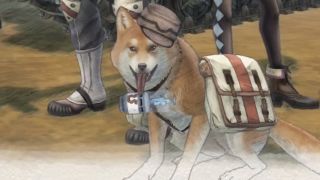 War is hell, but war featuring a shiba inu wearing an army cap over one of its ears? I don't care who you are, that's cute af. Behold, Valkyria Chronicles 4:

If you're not familiar with the Valkyria Chronicles series, allow me to acquaint you: imagine a quasi-steampunk World War 2, where soldiers are extremely attractive anime protagonists, and can use magic. As for gameplay, it's a tactical RPG / real-time strategy hybrid, kind of like if Fire Emblem and XCOM had a baby. It is also very, very good. And next year, we'll get the first new numbered installment since 2011's Valkyria Chronicles 3.

There's not too much to glean from this first look at the upcoming game, but it does sound like Valkyria Chronicles 4 will be going back to the turn-based controls of old, after a spin-off called Valkyria Revolution recently switched things up to a more active battle system. It also looks like the winter season and a frozen landscape will be a major focus for this entry. Mayhaps it will be analogous to real history's Operation Barbarossa, aka the Axis invasion of the Soviet Union during WW2?

In any case, the announcement of Valkyria Chronicles 4 is definitely good news for fans of the series. Other than the Valkyria Revolution spin-off released earlier this year and a remastered version of the first game released in 2016, it's been a pretty dormant franchise. It's also a somewhat scattered one, with the original game built for the PS3, but Valkyria Chronicles 2 and Valkyria Chronicles 3 released for PSP long after the handheld console trailed off outside of Japan.

Valkyria Chronicles 4 will bring anime-infused war (and dogs in hats) to PS4, Xbox One, and Switch sometime in 2018.