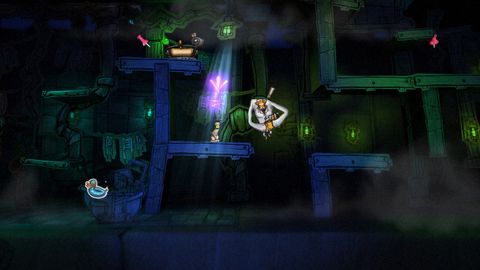 Ray Doewood never asked for the power to read minds, he was fine with his mundane life as a hardhat tester. But when he’s ironically hit on the head on his way home one night, an alien fugitive decides Ray’s brain is the best place to take refuge. With a giant spaghetti arm sprouting from the top of his head, Ray uses his newfound abilities to evade government agents and solve puzzles, making Stick it to The Man a delightful environmental puzzle platformer that carefully blends the weird with the unexpected.

Ray’s adventures take place in a 2D papercraft world, but it’s not charming like LittleBigPlanet’s cardboard landscapes. If anything, the crude animations are occasionally distracting and will push some people away, but the art is fitting to the game’s dark humor. It’s not morally conflicting to steal the teeth of an old man to place them on a down-on-his-luck bachelor when everyone’s drawn so hideously.

Stick it to The Man’s humor is in its characters’ cheeky exchanges that often break the fourth wall, though the story only serves as a vehicle to move the game forward. The narrative is as straightforward and simple as cartoon plots can be, but the dialogue is keenly aware of that fact. Situations Ray finds himself in are all kinds of strange--at one point you’re tasked with placing a sticker on a man to get him pregnant after helping two zombies fall in love. As entertaining as the environmental puzzles can be, a majority of what's happening in the world seems out of place as far as the story goes. One level has Ray running around a circus. Why? It doesn’t matter; you get to watch a three-headed wrestler fight himself and the hilarity justifies its existence.

Grabbing and placing stickers, reading minds, and clinging to platforms requires proper aiming of Ray’s head-arm--unfortunately, that’s much more difficult than it should be. Aiming is a chore when there’s more than one object in a certain spot. The arm you use to aim is often wobbling in place, so it’s hard to decipher what it will cling to when you press the appropriate button. You can use the touchpad on the PlayStation 4 controller to hover over the desired target, but it’s uncomfortable in practice and just highlights how broken the aiming can be when more than one item is in the way. It’s particularly aggravating when you’re trying to grab a sticker in an enemy’s thought bubble only to accidentally swing right in front of a goon and get zapped for the mistake.

Stick it to The Man is challenging enough to keep the game from becoming dull, but rarely will it stump you--it just takes a lot of running around and completing one objective at a time to understand where all the pieces go. At times you’re tasked with combining stickers to create a set that fits into another puzzle, or using action stickers to make enemies fall asleep, but the underlying premise is always about reading someone’s psyche and finding the right sticker that matches their crazy thoughts.

The widths of the levels add some complexity to the puzzles, often tasking the player to remember the location of a character and their needs to return to later when you find the appropriate sticker. There is a map to reference where all the important objectives are, but markers are indistinguishable when grouped together. The maps serve the puzzle aspect of the game more than it does the platformer portion; platforming in Stick it to The Man doesn’t add much content or difficulty to the game because there are no consequences for failure.

After an enemy gets you in their crosshairs and zaps you, you spawn just a few inches away to try again. Moving up and down platforms is just about discovering the right thumbtack to cling to, which are very easy to find. The platforms break up the repetition of the puzzle solving, but with no depth or strategy necessary, the game offers no replayability.

You’d think having the ability to read minds would be a cool power, but it quickly becomes one of the more exasperating aspects of Stick it to The Man. When you hack into a person’s mind, the music shifts to a slow dreary tone while you listen to the person’s thoughts. You can speed up and slow down the voice for comedic effect or if you’re in a hurry. Hearing the erratic thoughts of the characters, which are all wonderfully voiced through the PS4 controller, is a delight, at first. It doesn’t take long before the reverberation of the controller’s speakers becomes annoying, and it manages to break some of the game’s immersion. There’s also the complication of making sure you’ve listened to a character’s thoughts fully. Should you back out before finishing that person’s thoughts, you may miss a thought bubble that’s harboring an important sticker within it.

Shortcomings aside, Stick it to The Man is an amusing, albeit short, experiment of the point-and-click variety. The puzzles balance challenging the player and complimenting the world its characters inhabit. The tongue-in-cheek banter between Ray and the strangers he encounters are always witty, and carefully teeter the line of appropriate and outlandish. If clever and bizarre is what you’re looking for, that’s exactly what you’ll get with Stick it to The Man.

Esmeralda Portillo is a journalist who specializes in covering entertainment news and culture, primarily the video games community and YouTube space.
See comments