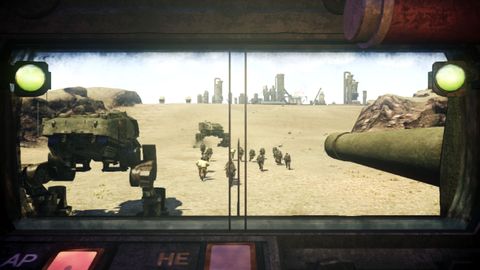 The wonderful thing about mecha is their transformative power. It's a dream embodied by the 'falling into the cockpit' trope introduced back in the heyday of '70 giant robot anime. In an instant, you go from regular teen to a hero capable of crushing whole city blocks. And you do it all with style.

Steel Battalion: Heavy Armor subverts that dream by putting you in an ugly, wobbly mech that is neither very giant nor very powerful. The main virtue of the Vertical Tank is... we’re not sure exactly. Certainly there are times — like when your legs are suddenly shot out from underneath you – that you’ll wish that you could skip all the fanfare and drive around on regular tank treads. And rest assured, that's not the illusion that anyone wants in their giant robot games.

But as it turns out, breaking the illusion is what Steel Battalion does best. It takes the glorious controller of the first game – a behemoth that infamously included an eject button that had to be used lest your saved game be erased – and crams it into an awkward mixture of controller-driven action and hands-free flailing. What starts as a potentially gimmick soon becomes tiresome, and not long after that, a genuine burden.

Part of the problem is the rather granular motions it demands. One tiny control surface that must be navigated on a regular basis includes a vent, an extra weapons button, the headlights switch, and the self-destruct button (watch out for that one) – a ludicrous proposition in the heat of battle. In the tense moments in which you are venting smoke out of your cockpit to head off asphyxiation, you are much more apt to hit the headlights or look over at your weapons officer, and then choke to death. Or get blown up.

Such control issues could have been alleviated with some very careful level design, but that goes out the window in a hurry. In the very first level, you're faced with a Normandy-style beach head loaded with enemy tanks and bunkers. It's massive, it's confusing, and it's absolutely the wrong note for an intricate action game like this to start on. In fact, impressive as Steel Battalion could be with waves of frantic radio chatter and booming explosions, you’ll often found yourself dreading the large setpiece scenarios. Having to fight large numbers of enemy mechs on a chaotic battlefield with a big, slow, lumbering VT and ponderous controls is just about the most frustrating thing in the world.