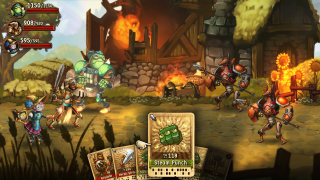 SteamWorld Quest: Hand of Gilgamesh may well have started as a side-project spin-off from Image & Form’s SteamWorld series, but it has quickly ballooned into the biggest and most built-out SteamWorld game to date.

While all of the games that fall under the SteamWorld umbrella share a steampunk aesthetic, unique charm, and a loving attention to detail, they vary in genre. Where SteamWorld Dig was about building tunnels through dungeon-like environments, and SteamWorld Heist was a tactical shooter, SteamWorld Quest is a turn-based RPG with a deck-building combat system akin to indie megahit Slay the Spire, but with multiple party members.

It’s wonderful to see a series with such strong direction retaining its essence through different formats. Despite SteamWorld Quest being radically different from its predecessors, it’s hard to imagine fans will find anything wrong in the way it feels – it’s a SteamWorld game through and through.

Each chapter is presented in the style of a medieval storybook. While Image & Form is being secretive about exactly when in the timeline this one takes place, members of the dev team tell us that it will become obvious once you get further in, and will tie in quite directly for those familiar with the previous games (though it’ll also work just as well as a standalone).

The story initially follows Armilly and Copernica, robots styled like a knight and a witch respectively. More party members with their own play-styles will join them over the course of the game. Running from screen to screen on a wider map, you can uncover secrets and chests, and do battle with enemies. Touch them and you’ll be thrown into the RPG fighting system, as you'd expect, though you can use your weapon to get the drop on them to start the fight with an advantage.

Easy to learn, difficult to master

The joy of SteamWorld Quest is in its simplicity and its flexibility. If you're familiar with the likes of Slay the Spire you'll pick this up in no time. If you're new to card-based RPGs then you shouldn't worry all that much, as once you dig into the basics you'll soon be a little struck by the depth that's there, hiding beneath the surface.

You start of by creating a team of three heroes, and each party member has an eight-card deck. At the start of a fight, your cards are shuffled together (they’re colour-coded for easy reference), and every turn you refill your hand back up to six cards. When you run out of cards they’re shuffled back around again, and you get a generous two redraws per turn if you need them.

Each round you choose three cards to use, from attacking skills to support ones, then confirm that sequence. Playing three cards of the same colour in a row makes your character use a special chain attack, which varies depending on the party member, from a strong single attack to healing your whole team.

Some cards are free to use, and help up your Steam Power (SP), which you can then spend to use even more powerful cards. It’s a very dynamic system, as SP generates with every play you make, allowing for long-term plays that use up your accumulated power.

Honestly, it sounds more complicated than it is; the true joy is in how simple it feels in practice. Striking a balance between free and SP-cost cards is intuitive after only a few rounds, and the somewhat limited 'eight cards per character' setup allows you to experiment and play around with how you make the most use of your cards. There are plenty of extra ones hidden away, although you'll need to fully explore the quirky world to uncover them all.

SteamWorld Quest is, ultimately, another wonderful release from the SteamWorld team. It's a card battling RPG that front-loads the fun, with the game's smart mechanics and gentle challenge only ensuring that we were eager to dive back into the gorgeous world for more of it. We’ll be dealt in for SteamWorld Quest: Hand of Gilgamesh when it launches on PS4 in 2019.