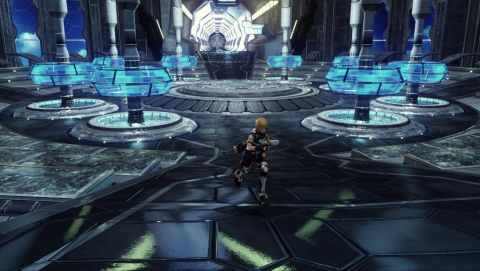 Despite the fact that Star Ocean: The Last Hope swaps the usual swords and dragons setting for spaceships and aliens (but keeps magic – go figure), the least typical thing about this sci-fi role-playing game is it’s combat. Most Japanese RPGs stick with the tried-and-true turn-based system – or its close relative, the Active Time Battle system, in which each character takes turns waiting for his or her or its meter to fill up between actions. Star Ocean: The Last Hope instead delivers all-out, full-tilt, real-time battles.

Don’t go thinking that this focus on speed means that combat is dumbed down and you won’t need strategy. It hasn’t been – you just need to do everything faster. There are four characters to swap between at any time during battle (actually eight, if you count the fact that you can also switch characters in and out of your party on the fly as well) and a ton of skills and abilities to learn. Add in a special attack called a “blindside”, in which you’re given the chance to attack your enemy’s vulnerable rear if you wait for the last possible second to counter, and you have an adrenalized battle system that really sets the game apart from most of its more relaxed, plodding contemporaries.

In most every other way, Star Ocean: The Last Hope is the prototypical, top-notch Japanese RPG. The detailed graphics look like Star Wars gone psychedelic, with crazily over the top outfits and more bright colors bouncing around than a disco party at a clown college. It has a young but gifted main character (named Edge Maverick, believe it or not) and a small battalion of seven customizable cohorts whose stiff, overly cartoon-y voice actors miss as much as they hit.

It sends this on a vast adventure built around an epic concept – you start off looking for a new home for humanity after World War III trashed our home planet, and things actually get bigger from there. It’s decidedly, unabashedly cute despite this very serious premise and the fact that you kill nearly every living thing you encounter. There are side quests, many of which seem oddly unimportant considering the urgency of your main goal, but you do them first anyhow. And you can make things out of the various animal parts, plants, gems and debris you find.

Unfortunately, SO:TLH even sticks to some annoying JRPG traditions we’d rather forget. It’s so miserly with the save points (why do we even NEED save points these days?) you’d think the developers had to sacrifice a child everything they placed one. And it alternates between talking way too much, telling its story through excessively long-winded cut scenes, and grinding you into numbness with dungeons so big that exploring them sometimes switches from “this is fun!” to “this is work.”

Of course, that’s all part of being a Japanese RPG, so some fans will find the depth and challenge delightful. If you think you can sack up and deal with quick battles balanced by long, slow everything else, there’s no doubt that Star Ocean: The Last Hope will deliver a ton of Japanese RPG goodness.