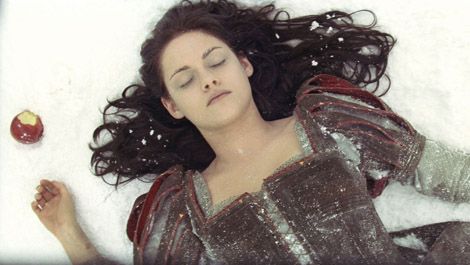 Naturally, it begins with “once upon a time”. And yes, along the way there’s romance, a poisoned apple, a stimulating smooch and a queen with a heart as black as coal.

But despite Kristen Stewart’s pasty-faced princess catching the covetous moongazes of at least two would-be suitors, this fantasy epic’s more about kicking arses than kissing them.

This isn’t the same gilded fairy-land Tarsem Singh upchucked with his yawny Mirror Mirror . Within minutes we’re neck-deep in a bloody battlefield, where King Magnus (Noah Huntley) discovers the bedazzling Ravenna (Charlize Theron), takes her as his new queen, then finds himself at the wrong end of a very sharp blade.

Seizing the throne for herself, Ravenna banishes her step-daughter Snow White (Kristen Stewart) to a dank cell and plunges her kingdom into a rotting fug. When Snow comes of age, she flees the castle, only to have Ravenna send the strapping, booze-glugging Huntsman (Chris Hemsworth) into the Dark Forest after her. Will it all end happily ever after?

It’s never really a question. Though first-time feature director Rupert Sanders is keen to subvert the original Grimm tale for goth-action thrills, he shies away from all-out revisionism.

A former ad man (he directed an impressive Halo 3 commercial), Sanders got the gig on the strength of a promo reel he stitched together to show off his idiosyncratic vision for the film.

That vision is SWATH ’S main strength. Haunted woods, Theron bathing in a vat of creamy milk, then smashing apart into dozens of flapping ravens... The images are stark and effective, and SWATH heaves with tangibly craggy landscapes that are part Dagobah, part Winterfell, entirely believable.

Sadly, the story never matches the exhilarating optics. While Theron’s mental, soul-sucking queen offers theatrical menace, and the numerous action clashes easily get pulses pumping, the plot’s limited to a series of encounters between Snow and often unremarkable B characters.

Of those, Sam Claflin’s useless Prince William (no really) comes off the worst, while poor old Lily Cole puts in a blank, blink-miss performance. Even Hemsworth’s loveable lug is lumbered with an off-kilter Scottish burr.

Leave it to Bob Hoskins and Ray Winstone’s octet of mushroom-loving dwarves to lighten the often funereal mood. Singing, dancing, adorably savage, they brighten up SWATH ’s second act with warmth and humour.

In a film more in love with its eye-catching terrains than its characters, that’s no shortcoming.