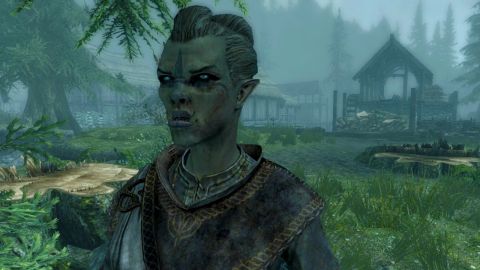 Motion controls add a breath of fresh air to a familiar game, with astounding results. A must-have for anyone with a Switch and a love of open world games.

Skyrim was released in 2011. We didn’t know it back then, but that would be the start of its seemingly immortal life cycle. First came the release on PS3 and Xbox 360, then it was packaged up with all the DLC and a whole lot of visual improvements to create Skyrim Special Edition, and then boosted to 4K for the PS4 Pro and the Xbox One X. PC gamers, of course, have always been able to mod it to oblivion and back (if you’ll pardon the pun) - but despite the fact that it’s been out for 6 years now, Skyrim on Switch is something new. Something better.

If you’re anything like me, the grand total of your saves for Skyrim stretch into hundreds of hours - possibly even thousands - from 2011 all the way up to 2017. After first starting it on PS3 or Xbox 360, like me you’ve probably upgraded to PC or next-gen consoles and modded it to add in new quests, new followers, redesigned textures, towns (as well as some ridiculous mod that turns dragons into Thomas the Tank Engine, right?). You’re so used to being an abominably high level that the thought of starting it all over again on Switch might seem tiresome. It’s not.

And that’s mainly thanks to one thing. By the nine divines, motion control is a revelation. Detaching the Joy Cons and docking the Switch into the TV lets me aim bows and spells as if I’m really there, sneaking through dungeons and running recklessly into bandit camps. See, you can control where your weapon (or lightning-filled hands) is pointing by charging up a spell or drawing an arrow. Squaring up an unaware Draugr from afar, there’s this delicious moment of suspense as I get it in my crosshairs with one outstretched, wavering hand. That advice you hear about holding you breath when you’re aiming? Turns out it’s just as useful in Skyrim as it is in real life.

Even in broad daylight with bandits in pursuit, after some practise motion controls allow me to quickly whip around and fire off a spell or arrow with a precision that would be impossible via a controller. Okay, mouse allows a hell of a lot more instinctive aiming that consoles do, but motion control trumps even that in terms of immersion. I feel like I’m there, desperately hoping my limbs obey my instructions. Just like I would in real life. And I do all that from my sofa.

Brandishing a sword and shield feels just as good. Swinging my Joy-Con with varying degrees of fervour produces different attacks, with light attacks needing a swift swipe, and heavy attacks requiring an almighty slash that almost propels me off my sofa. Holding up your shield is done by literally raising the Joy-Con to your chest, plus you drop it to your side by - surprise surprise - lowering the controller. Using both Joy-Cons connects me to Skyrim’s world more than ever before. Taking on onslaughts of enemies has me periodically raising my hand to my chest defensively, waiting for the perfect moment to shield bash the Wight getting ever closer, and when my health is dangerously low you can bet I stabbed the air as if the undead warrior was right in front of me, filling my nostrils with the smell of decay and stifled air.

Combat isn’t the only thing that benefits from these new motion controls, though. Lockpicking has you twisting the left Joy-Con to manipulate the pick while you gently push the other controller to turn the lock. Muscle memory ensures that lockpicking soon becomes a doddle in both PC and console versions of Skyrim, but the same does not go for Switch. One wayward twist, and the pick will snap - it’s noticeably more fragile than before. Dexterity is key here, forcing me to hone my movements, moving the pick delicately as if I’m levelling up my lockpicking skill right there in my living room.

Skyrim on the go

If you’re not fond of sitting in the same position for hours on end, don’t worry. Playing undocked is a portable joy. The graphics have been boosted (they’re not at PC-mod levels, of course) so the benefits of seeing it on a small screen are obvious. Everything looks more detailed, with noticably better textures.

However, if you’re playing in anything even vaguely nearing broad daylight you’re inevitably going to run into a roadblock: brightness. There’s no option to adjust the in-game brightness in Skyrim’s settings, meaning the dungeons are pitch black in places if you don’t have a torch or spell to light the way. Even though you can increase the screen brightness on the Switch, it does little to help. Although there is the argument that it helps to immerse you in the dungeon-delving even more. But for me straining my eyes just wasn’t any fun. The same bugs crop up again too, with NPCs stuck in a scripted conversation after their town was attacked by a dragon. Because I can’t force them into their shop with console commands, I’m now deprived of a trader in Winterhold. Insert frustrated sigh here.

But taking Skyrim out on the go and being sucked into its world on a train journey is borderline disconcerting...in a good way. No, really! Radiant quests (ones based around repeating the same errands over and over) suddenly make sense, and slot perfectly into my quick 10-minute commute instead of being tiresome chores. Loading times are short and sweet, meaning you can move between shops, caves, and towns without having to waste any precious seconds in the loading screen. Dipping in for quick quests isn’t the way most people play Skyrim (after all, it is famous for the amount of hours you can rack up), and having the option to do so now gives it the brief, light-touch escapism of something like Stardew Valley.

The best Skyrim companions: Which are the best followers to join you on your quest?

Six years after its original release, I’m astonished that Skyrim can still surprise me. I didn’t expect to feel so strongly about playing it again on another console, but the motion controls added thanks to the Switch completely changes how it feels to navigate its bustling cities, breath-taking landscapes, and unnerving dungeons. For anyone who can’t get enough of Skyrim and thirsts for true immersion, playing it on Switch is the answer. You might have to deal with a few bugs and make sure you always have a torch at the ready, but few things compare to lifting your arm and seeing your character do the same. Skyrim on Nintendo Switch unites player and character in a brand new way, and all I can think about is when I can dive back into its world.

Motion controls add a breath of fresh air to a familiar game, with astounding results. A must-have for anyone with a Switch and a love of open world games.