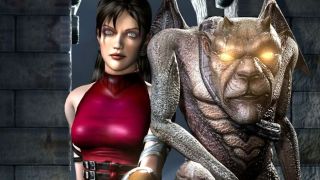 When Primal came out in 2003, it didn't make much of a wave in the overwhelming ocean that was the PS2's library. Blame bad marketing, too many games to choose from, or a bad launch window, but whatever the case, the game - while praised critically - was skipped by many. Too many. Now that it's on PS4, this is your chance to rectify that.

You play as Jennifer Tate, a girl with a mystery in her blood and an eloquent gargoyle at her side. Oh, and a boyfriend she's out to rescue from the four realms of Oblivion. Now there's a twist you don't see often, huh?

Jen herself is an excellent heroine, and it's a shame we haven't seen her re-appear in any sequels or spin-offs. She comes across as strong-willed and formidable without the writer constantly shoving some faux "badass 'tude" in your face, and her gender isn't really fixated on as either a negative or a positive. She's just here to punch some demon faces and get her life back together; gender politics are not her concern at the moment.

Primal's story is remarkably well-written and acted, especially considering that it came about in an age where voice actors were still mostly a gaggle of unknown names and video games were just dipping their toes into the pool of complex narratives. It spans multiple realms, realities, plots and sub-plots, but you never lose sense of what your purpose is or where your next goal lies.

The worlds are coherent and boast exceptional artistic direction, my particular favorite being the water-drenched Realm of Aquis. What can I say, I love the monstrous mermen, Lovecraftian horrors, and carapaced crab-beasts. And whether it's a little girl with a dead pet rat or a demonic lord searching for his son, everyone you meet is memorable and distinct.

Like the much-loved Legacy of Kain and the original Tomb Raider series, Primal is a relic of a bygone era in gaming: a time dominated by action-adventure titles that required you to slow down and think as much as they challenged you with combat. While Primal's fights are supremely satisfying thanks to Jen's ability to morph into demonic forms (each one associated with a different element like fire, or concept like time), it's the various puzzles you'll encounter that stand apart. Sure, you'll be pushing and pulling a lot of blocks, but that's just the way demon architects built things, you see.

Make no mistake, there are some rough edges. This is a 13-year old game after all, and it's not going to be as smooth as a contemporary title. And even with the upscaled PS4 version, it's not going to stun you with its visuals. But think of it like a movie: if AAA games are summer blockbusters, then Primal is The Rocky Horror Picture Show - a dark, weird, twisted classic that most people will never "get." But you will, and once you do, you won't forget it.