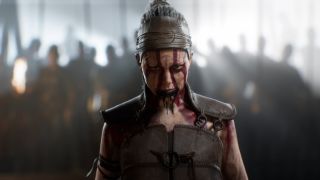 Prepare yourselves, because Senua's Saga: Hellblade 2 is going to be an absolutely bonkers ride. The game was confirmed during The Game Awards 2019 with a surprise trailer that was built entirely in-engine for the upcoming Xbox Series X and will be published by the British company Ninja Theory, the same team behind Hellblade: Senua's Sacrifice.

We don't have very many details about the upcoming game, aside from it's one of the first confirmed upcoming Xbox Series X games, Senua is obviously the protagonist again, and there's a wild, experimental folk/industrial band called Heilung in charge of the soundtrack (you can get a taste of their music in the trailer below).

The original Hellblade was lauded for its compelling plot and its innovative use of motion capture. The story follows Senua, a Pict warrior who must defeat otherworldly beings to rescue the soul of her dead boyfriend from the goddess Hela - simple, right? Well, Senua is struggling with psychosis, which makes her an unreliable narrator and makes the gameplay disorienting - Ninja Theory made sure to work close with mental health specialists, neuroscientists, and people living with psychosis to portray it in as respectful a manner as possible.

Due to a limited budget, Ninja Theory got creative with their motion capture techniques, filming Melina Juergens (Senua) in a small room with a single camera all in one take. They also recorded several actors using binaural recording techniques that could record the 3D position of the sound source, making Senua's voices in her head all the more unsettling.

It's safe to say Hellblade 2 will further navigate the role of Senua's psychosis in the plot and in its gameplay, but how it will do that remains to be seen. We don't have too many details on the upcoming sequel, but everything we know about Senua's Saga: Hellblade 2 can be found below.

The Hellblade 2 release date is unknown, but it's definitely after holiday 2020

We've got no set release date for Hellblade 2, but it's a safe bet we won't come anywhere close to seeing it until after holiday 2020, when the Xbox Series X will drop alongside its next-gen competitor, the PS5. Since Hellblade 2 is in early development, it's unclear whether it'll even be ready to be an Xbox Series X launch title, but a girl can dream.

Hellblade 2 will be an Xbox Series X title

It was announced and confirmed at The Game Awards 2019 that Hellblade 2 will be an Xbox Series X exclusive. It'll join a respectable (and rapidly growing) list of titles that are confirmed Xbox Series X games, including Watch Dogs Legion, Halo: Infinite, and Starfield, the Bethesda game that's reportedly keeping the Elder Scrolls 6 development at a standstill.

Check out the trailer for the game below, and know that it's allegedly built entirely in the Xbox Series X engine, which means there's no pre-rendered CG in it at all. It's definitely possible that this is a true statement - the newest Xbox promises 120 FPS, 8K, and ray tracing that's supported by dedicated hardware. It's also reportedly four times faster than the Xbox One X. Hellblade 2 could also be a first look at what Unreal Engine 4 can deliver on next-gen consoles, as it was the engine that powered the original game.

The first Hellblade 2: trailer is a wild ride made entirely in-engine

Phew, this trailer is a doozy. As we mentioned before, this breathtaking trailer, complete with undulating waves, lightning strikes, flickering flames, volcanic eruptions, and some intense facial expression was all built in-engine on the Xbox Series X. A Eurogamer article delves deep into whether or not this is a possibility, citing the imperfections in the trailer that "rule out a pure CG asset" including depth of field problems like halos and pops.

But about the trailer's contents, which are as wild and creepy as you'd expect from a Hellblade sequel. A series of sprawling landscape shots interspersed with shots of Senua standing among flames turn into darker, more Pagan-y visuals pretty quickly. Senua begins chanting, and multiple voices join hers. We see skulls lining the ground, hands hung from poles that line a road in what is probably the worst archway ever, and repeatedly see what looks to be a city or some type of base at the top of a mountain. Is this calling to her? Is it her home? We can only guess.

The trailer ends with a parallel shot of a group of people holding weapons approaching a mountain and a group of people wearing some type of ritualistic garb approaching a rune. As a horrifying giant emerges from the mountain, the rune lights aflame. The last image we see is the village, with a rune drawn around it that looks similar to a Viking rune of protection.

Hellblade 2 story - what could happen?

We know from the original game that Senua is a Pict warrior from a Celtic-speaking tribe that lived in what is now eastern and northern Scotland during the 8th century. These tribes regularly came into contact with Vikings, who often decimated their villages.

Senua, after years of abuse from her father who believes her psychosis is a curse, falls in love with Dillon, a man from another village and goes to live with him. When most of the village dies of a mysterious plague, she exiles herself, returning a year later to find that Vikings had slaughtered the entire village, sacrificing Dillon to their gods. She decides to head to Helheim, or Viking hell, to retrieve his soul. I

If we pick apart the Hellblade 2 trailer, we can find some clues about what's to come. This village we repeatedly see could possibly be Senua's, and perhaps she is utilizing some of the knowledge she learned while in Viking hell to drum up some Norse magic to repel their invasions. As GamesRadar+ previously reported, the Hellblade 2 trailer features a song from the band Heilung, who will be working on entire soundtrack with Ninja Theory. The song 'In Maidjan' can roughly be translated in English to:

Come, guest Tyr
For this invocation
I, the Rune Master, servant of Odin, call upon the one of the Sun to aid our army

'In Maidjan' means "to corrupt" and this is clearly a battle song that invokes a Norse god (Odin). Could Senua be leading her tribe in Norse pagan rituals that she learned during her time in Viking hell? Maybe embracing the beliefs and magic of those who are slaughtering her people and invading their lands is the only wait to defeat them. The rune at the end of the trailer is a Viking or Celtic protection rune (there are shared characters between the two), and the fact that it's drawn around the village we keep seeing only strengthens this argument.

It's all speculation, but it's so dang interesting, isn't it?